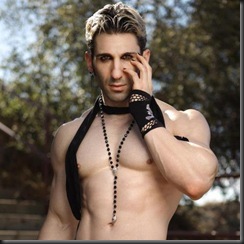 Gender-bending pop-star Sir JET battles depression and social anxiety in his latest release “Shout-out to the Lonely,” a four song EP and emotional music video for the title track.  “Loneliness, social insecurities, gender anxiety, these are all silent killers that as a society we need to overcome if we’re ever going to advance in the 21st century.  Learning to love yourself is a process we all need to practice daily.” explains JET.  This single and EP mark the sixth music release for the hunky singer and is his most powerful yet.  “Creating these songs helped me come into my own finally, letting go of all inhibitions I embraced the emotional, effeminate, silly artist I really am.  I had to prove to myself that I am lovable before I could convince anyone else that they are too.  These songs are about embracing the fear we carry about not being good enough and learning what that fear is here to teach us about self-acceptance.”  The EP also includes a song cowritten by JET’s friend, former American Idol finalist, Kimberley Locke entitled, “Hikari Iku,” which in english literally means “having a sparkling orgasm.”  Other tracks on the EP include “Bend that Gender and Explode!” a track JET wrote in response to all the criticism he’s faced as a man who enjoys women’s clothing not as a fetish, but as a form of self-expression, and the ballad, “Like God,” where JET compares finding the love of his life to a religious awakening.

If Sir JET looks familiar to you, you’ve probably seen him somewhere on tv or the net.  He was the “madonna crotch” on last year’s fall season of Bravo’s Millionaire Matchmaker, and was the man transformed into “male Madonna” by photographer Mike Ruiz (The A-List, Ru Paul’s Drag Race).  JET’s Madonna link doesn’t stop there: the video for “Shout-out to the Lonely” was directed by Madonna’s former back-up dancer, Carlton Wilborn (“Vogue,” Truth or Dare), along with artistic direction and make-up by Fidel Gonzalez aka Silhouette, a former West Hollywood Madonna impersonator.  “I love all the Madonna connections I’ve been making, I think she’s such an amazing performer and has done so much for the human rights movement.  It’s definitely a goal of mine to work with her on a project someday!”

The video for “Shout-out to the Lonely” was shot in Apple Valley, CA, and as JET explains, was his most 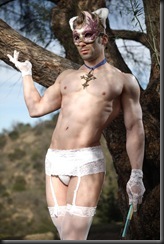 challenging video yet.  The former “Boy who Talked Like a Girl” had to go places he didn’t want to.  “At first I resisted.  I wanted to create a gender-bending elegant video, but Carlton refused to let me give up those elements of pain and solitude the song is built around.  I wasn’t really giving a ‘shout-out’ to the lonely if I wasn’t going to empathize and say ‘hey, we all feel lonely at times, I feel your pain’ by demonstrating my own pain.  The hardest part was reliving my own mental breakdowns and suicidal thoughts I had as a teenager.  I cried for weeks, as I had no idea those thoughts still existed in my sub-conscious.”

What’s next for this strange avant-garde singer?  JET is currently raising funds to do a music video for the song, “Like God.”  The video will be used to promote and raise funds for marriage equality.  Visit www.sirjet.com to learn more about the project.  JET will also be performing to raise funds The Bottom Line in Orlando, FL on October 27th.  For more on Sir JET, check out www.iamsirjet.com.  The “Shout-out to the Lonely” video can be seen on youtube, and the single “Shout-out to the Lonely” is currently available on itunes and amazon.com, along with the EP coming out in early November.