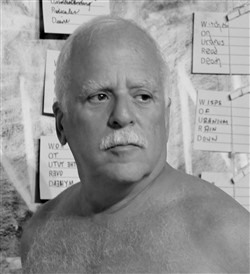 Stu, a retired professor, taught human diversity courses for 30 years. His first college job, in 1964, was posing naked for art and photo classes— he still poses part-time! “Lights On—Clothes Off” ‘Confessions of an Unabashed Exhibitionist’ is his first novel.  Stu welcomes your comments. His book: lightsonclothesoff.com.  His email: [email protected].

This month’s column’s dedication is to the many people I know who enjoy seeing others naked—and especially to the ones I have bared all for over the years. Those of us who are exhibitionists love you and need you. Are you one? If so, cheers to you. But are you in the A Group? Or in the Z Group?

A voyeur is not, as I somewhat implied above, one who only desires or enjoys seeing people naked. Some are legitimate, legal, and socially appropriate, whether their visual subject is nude or clothed. (The A group). However, some voyeurs are inappropriate and often breaking the law. (The Z group.)

One of my favorite pastimes is people-watching. It’s great to grab a seat on a park bench and watch people strolling by. That doesn’t label me as a voyeur, well, perhaps to an extent. I admit that I enjoy seeing the fashions being paraded and observing how outfits highlight and accent the body. When the weather is warmer and the outfits become minimal, the sights become more exciting and pleasurable.

What makes me a proud member of the A Group? It is due to the walkers in the park, those in bathing suits on the beach, the individuals who are naked in a movie or on stage, or those posing sans clothing for an art class, ‘know’ that they will be seen. They have, by their actions, consented to be viewed. Therefore, when I’m enjoying these sights, I’m doing so with their permission. And my pleasure is not a sexual thrill.

Let’s consider the Z Group folks — those naughty, naughty people. In a recent YouTube broadcast of Bondi Rescue (a show highlighting the work of Australian lifeguards), a man was observed swimming up to women and taking close-up photos of their bodies–of course without their permission. He was escorted off the beach by the lifeguards and police. Another Z Group example is the hidden camera scheme; many instances have been documented and have led to arrests.

Examples of this ploy include hidden cameras in department store changing rooms and in public bathrooms.

Other similar behaviors have been the use of cameras concealed in the ceilings of motels and cameras hidden in gym bags in health club locker rooms. Z Group voyeurs don’t only use hidden devices; sometimes, they are brazen in-person invasions of people’s privacy. For instance, they may sneak up to someone’s home and peek through the windows hoping to see someone undress or watch people engaged in sexual behavior. Or they may make a small hole in the wall between bathroom stalls to observe someone who is peeing. All of these Z Group behaviors are disturbing and typically illegal.

I think that there’s a bit of voyeurism in all of us. But not the way it’s defined in dictionaries or described by mental health professionals. Those in the A Group are not seeking a sexual thrill; we are simply enjoying and admiring people around us. However, Z Group folks seek some sexual thrill for themselves without regard for those being watched.

When I pose for artists and photographers, I proudly stand naked in front of them. And I’m secure with the knowledge that all of them are part of the A Group. Well, maybe (hopefully) some of them are somewhere in the middle of the alphabet as long as they aren’t at the end.