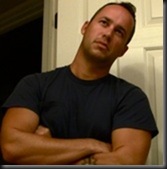 Dan grew up in Michigan, where he made the erroneous error of mistakingly mistaking he had the acting bug. His first show in 1987 (he was a teenager at the time) was “Danny the Clown Show.”

Dan has interviewed hundreds of actors. His crowning achievement was when Holly Hunter’s leg brushed up against his in an interview.

After ten years in Los Angeles, writer/director Dan Steadman moved to Montana for awhile to switch things up. His sister lived up that way and he immediately fell in love with the scenery. The lack of arts in Billings, Montana’s largest city, was another thing. Driven by passion to stir up the artistic community, Steadman created a talk show for his sister Sarah that ran for fifty five episodes on the NBC affiliate. When that ended, he knew he wasn’t going to last much longer in the wild, wild west, so he decided to film a movie.

“I wanted to tell a story of the version of Montana I wanted to live in,” he says. “The Montana where gay sex isn’t illegal, still. The one where gay couples happily roam the cities like their gay counterparts.”

The most gay friendly town he found, other than the hip college town of Bozeman, was a tiny little ski town of Red Lodge. “I’d always loved Red Lodge but never knew how inclusive it is. They even have an openly gay councilman.”

Steadman had to fly his two lead actors up from Los Angeles to play the main characters, Dave and Jordan. The rest of the cast was rounded out by local talent in Billings. The community hadn’t hosted a lot of filmmakers in decades since the Tom Cruise film “Far & Away,” so they were very helpful in providing food and lodging for the actors.

“I’d love to do this in all fifty states,” Steadman confesses. “I probably won’t live long enough to realize that, but I’m passionate about telling human stories that happen to be about gay humans. I’m not really satisfied with the state of gay filmmaking, so rather than complain about it, I need to do something about it. The future of independent film is shaky because young people are accustomed to stealing movies online and older people want movies to cost no more than one dollar to rent. So it’s very difficult, as a business model.” Steadman says he delivered pizzas after the talk show ended in Montana. Money from pizza deliveries funded “Red Lodge.”

“I wanted there to be a modern dramady set at Christmas time,” he says. “There weren’t those types of movies that I want to see around the holidays. Not with gay characters. So… hopefully now there is.”

The movie “Red Lodge” is available at Steadman’s website Circa87.com and on Amazon.com.