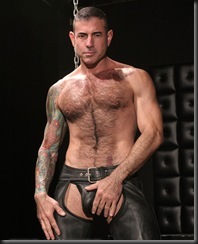 Raven interviews Nick Moretti.  Part I is below.  Part II will appear in the July issue.

From that point on, I didn’t beat myself up about my performance and observed everything everyone was doing around me… the lighting guy, cameraman, photographer, director and the all models… and I asked questions about everything. Then I did the start-up shoot for Bound Gods and found BDSM. Never knew I would totally get off on being a Dom, but I did… and I do. I was one of the lead models at Kink.com
for many years and, again, I learned everything I could during the shoots. When the opportunity to direct for them came up I jumped at it. A few years later and I am now directing full time for Factory Videos Inc.
I’m also directing scenes for Dark Alley Media and they just released the series of “fetish” scenes I directed for Treasure Island Media. And I’m still performing frequently for many companies.

One that I take very, very seriously. Finally, the feedback I get from my fans is really amazing and inspires me to keep growing in the industry. Although there are some nasty people out there who send hateful messages, I have to say that the overwhelming majority of messages I get are from people thanking me for doing what I do. For doing what they only dream about doing but will most likely never be able to.

RE:  You directed  Treasure Island Media’s recently released  “Damaged Goods”. This movie has people talking about how rough the scenes are. What was the inspiration for some of the acts in this movie?

The evil, sadistic smile on Anotonio Biaggi’s face while he is dripping hot candle wax on Patrick O’Connor’s dick can not be faked. The scene where Brad McGuire and I beat Rowdy McBeal senseless as he begs for more is probably the most controversial scene in the movie. We brutally fuck Rowdy’s face and ass and leave him broken, bleeding and totally satiated. At one point Brad was pounding the boys ass as hard as he could while I was fucking his throat. I increased the pressure of my arm around his throat and started to choke him out. I’ve never seen this captured on film before and watching it gives me chills. Rowdy goes from a state of panic, to an eerily tranquil lights-out moment that is shattered by a back-to-life gasp. This abuse was like a drug to him and Brad and I fed off the high he was getting from it. Rowdy was my boyfriend at the time and I was absolutely  sure he was totally into it before we did the scene. Real life hardcore players in extreme scenes with hot bareback sex… that’s what the viewers asked for, and that’s what I gave them.

Make sure you don’t miss Nick’s feature and all the other great articles and information in the June issue. You best subscribe NOW. Queer Pride Month Special: Subscribe during the month of June and get 15 issues for the price of 12 PLUS a digital subscription for yourself AND a friend — 2 for the price of one. Subscribe online at: