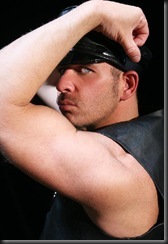 Scott has appeared in movies for such major studios as Channel 1 Releasing, Lucas Entertainment, Falcon Studios, and Ty Lattimore Entertainment  among many others over the past 13 years.  Photo Credit:  Greg Weiner Photography.

RE:  You have been in the adult entertainment industry for over 10 years now.  That is considered a long time in the industry.  What would you say the key to your longevity in the industry has been?

SS:  I do not burn bridges. I am on time, in a great mood, I treat people the way I want to be treated and I really love what I do and enjoy lots and lots and lots of sex and promote the hell out of the studios I work for and think that is why I get called back to studios over and over again! I have been in films since January 2000 when I did my first film for Catalina Video called “Bath House Bears” and have been in over 140 films since then averaging about 10 a year and am still going strong.

RE:  Earlier this year a few high profile gay stars committed suicide some have blamed their deaths (and others) on how the gay adult entertainment industry uses its talent up and tosses them aside for the next flavor of the week.  What is your take on this?

SS:  I know of a few deaths and they were either drug related – meth and steroids, HIV related or social issues such as marriage equality. I am not aware of a performer dying because of how they are treated by the adult entertainment industry. I think they thought the industry would not maybe hire them for what they felt were insecurities.. I mean things are not like they were when I first started working for films. Back in the early 2000’s we were flown out first class, put up in a nice hotel for days before filming, given an expense account, a trainer, and a handler. I still get some of those filming today, but you are not made to feel like a “star” these days… I started with the best in those days and that was Catalina Video.

RE:  Any other adult stars that you would like to work with that you haven’t yet?

SS:  Best memories of working in the industry. I can narrow it down to a few. One would have to be working at Channel 1 Releasing under the direction of the world famous Chi Chi LaRue with so many hot guys on “LINK: The Evolution” it was all of my leather fantasies combined into one film. Another would be filming a scene with my co-star being Michael Lucas for Lucas Entertainment living out my watersports fantasies and another would be filming in Atlanta with the legendary Ty Lattimore for his company and the last would be being filmed in a scene for Galaxy Pictures in the middle of one of their infamous weekend pool parties although I got sunburns in places you should not get sunburned at that… Those are my favorites. I really enjoy working in films and respect the directors, cast and crew on each film treating others as I want to be treated. As far as what the industry has allowed me to do I would say it would be raising money for gay and AIDS related causes like performing on the Bad Boys on the Hudson cruises with Will Clark in NYC and the INappropriate Behavior Parties with Michael Brandon. Other perks include being asked to go go dance at clubs such as the Lucky Horseshoe Lounge in Chicago and the Bourbon Pub in Key West and getting backstage passes at concerts. Regrets, well I try not to think of those. We all make mistakes but why go through those again…another reason why I think I am still in the industry!

To see all the exciting features in the September issue of Diversity Rules Magazine, SUBSCRIBE TODAY!