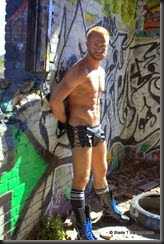 Born and raised in Canada, Christopher Daniels has been an entertainer for most of his young life. From a ballet company member to performing as a Las Vegas “showboy,” he has enjoyed a vast and varied career in the entertainment industry. He began his adult film career in 2010, a year after he started escorting. Daniels’ was voted Rentboy.com’s “Mr. San Francisco Escort of 2013” as well as “Mr. International Escort of the Year 2013.”  He spends his time traveling, making personal appearances across the country, and as much time as he can at home in Las Vegas with the two loves of his life, his Cockapoos, Faust and Finnegan.  For more information about Christopher Daniels, his appearances and Money’s On the Dresser, please visit www.Christopher-Daniels.com and follow Christopher on Facebook @CtopherDanielsVegas and Twitter @CtopherDaniels.

The question “did you ever wonder what an escort’s life is really like?” has finally been answered. Adult film star and escort Christopher Daniels chronicles his career as a businessman who sells his time and companionship to other men in his new book, Money’s On The Dresser, was released December 15, 2013.

Called the “Hemingway of Hookers,” Christopher has written a deeply personal and revealing book about his life 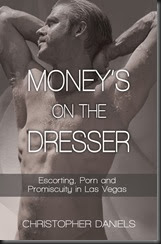 as an escort and performer in the gay adult industry.  While offering his time, and sometimes his body, to his clients, Christopher discovered many truths about himself. From what he thought he wanted out of life to the realization that he is on course to enjoy a sane and controlled exploration of what he wants his future to become.

Daniels’ began working as an escort in Las Vegas in 2009 after breaking up with his partner of four years.  As a newly single man he felt lost, scared to be on his own and broke.  He decided the best solution was to place an ad on a few websites advertising male escorts and to his surprise, hours after the ad went up he began receiving a wide range of requests.  These requests came from a varied group of men – some with disabilities, physical deformities, married businessmen and even gorgeous men he was extremely attracted to physically. A few of these men became mentors and friends, while others made him want to run out of the room screaming.  Money’s On The Dresser is a collection of short stories based on some of those escort experiences.

“I chose the path of escorting – and later porn – because of money,” admits Daniels. “In doing what I am doing I have been able to use my sexuality as a way to connect with people, and make them feel good on many levels – not just sexually.  I didn’t expect to have an impact on others and I feel blessed that I have been able to do so. Of course the money is the reason I started escorting and the reason why I continue. But, it means a lot to me when I can have a positive effect on someone’s life and give them an experience they will never forget.”

Christopher’s sophisticated, self-deprecating and often hilarious writing style will surprise and delight readers, regardless of where they stand on the topic of the adult entertainment industry.  Money’s on the Dresser (Suggested List Price: $14.95) is available at www.Christopher-Daniels.com (for USA orders) and www.Amazon.com (for international orders).