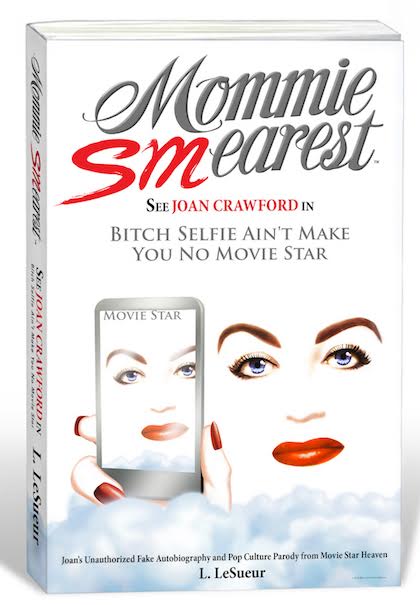 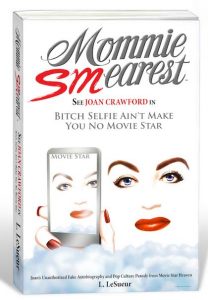 When JOAN CRAWFORD is stopped at the gate to Hollywood Heaven and ordered to Hell “for reasons well known to her,” she charms (acts) her way past the aspiring-rapper guard and manages to enter Heaven on probation. To get off parole, she must return to Earth to both explain her Mommie Dearest sins and perform good works, most notably: rescue true celebrity back from today’s reality starlets and civilian selfies.

From a secret base at a Florida trailer park, JOAN CRAWFORD launches a raucous plotline that parodies today’s rich and famous − including reality starlets from Hollywood, Washington, Wall Street and the mall – many of whom Crawford finds lacking as true stars. As part of her good works to gain entry to Heaven, Joan plots to unmask a corporate executive blowhard in a mini-skirt-power-suit she views as a personal-brand-building fraud. And most significantly, Joan takes aim at the newest form of “d”-lebrities: everyday people who think they’re stars because their YouTube video has gone viral or their selfies have a thousand likes on Facebook.

In addition to trailer parks and a chicken-processing factory, readers are whisked into phony-fabulous locales including Trump Tower, pro-football stadiums, boardrooms, and the New York Times social columns. In between her squabbles and plot twists, Joan offers hilarious flashbacks from her own rich Hollywood life, including a never-revealed (until now!) audition for TV’s The Brady Bunch, and a feature-length lie called Monster Dearest: Keeping Up with the Crawfords, in which Crawford sort of, but not really, explains herself as Mommie Dearest. She even records her first rap song and video, “Bitch, Selfie Ain’t Make You No Movie Star”, viewable now at https://youtu.be/8OlFhBeRD0g.

In the end, multiple story lines converge into an affirming crescendo celebration that includes criminal indictments, a high-profile gay society wedding, and the final verdict on Joan’s entry into Hollywood Heaven. It all serves as a reminder of the ‘realness’ of fame, especially in today’s celebrity-obsessed culture where anyone with a smartphone can be a star.

MOMMIE SMEAREST: See Joan Crawford In Bitch Selfie Ain’t Make You No Movie Star is available digitally and in softcover now at: