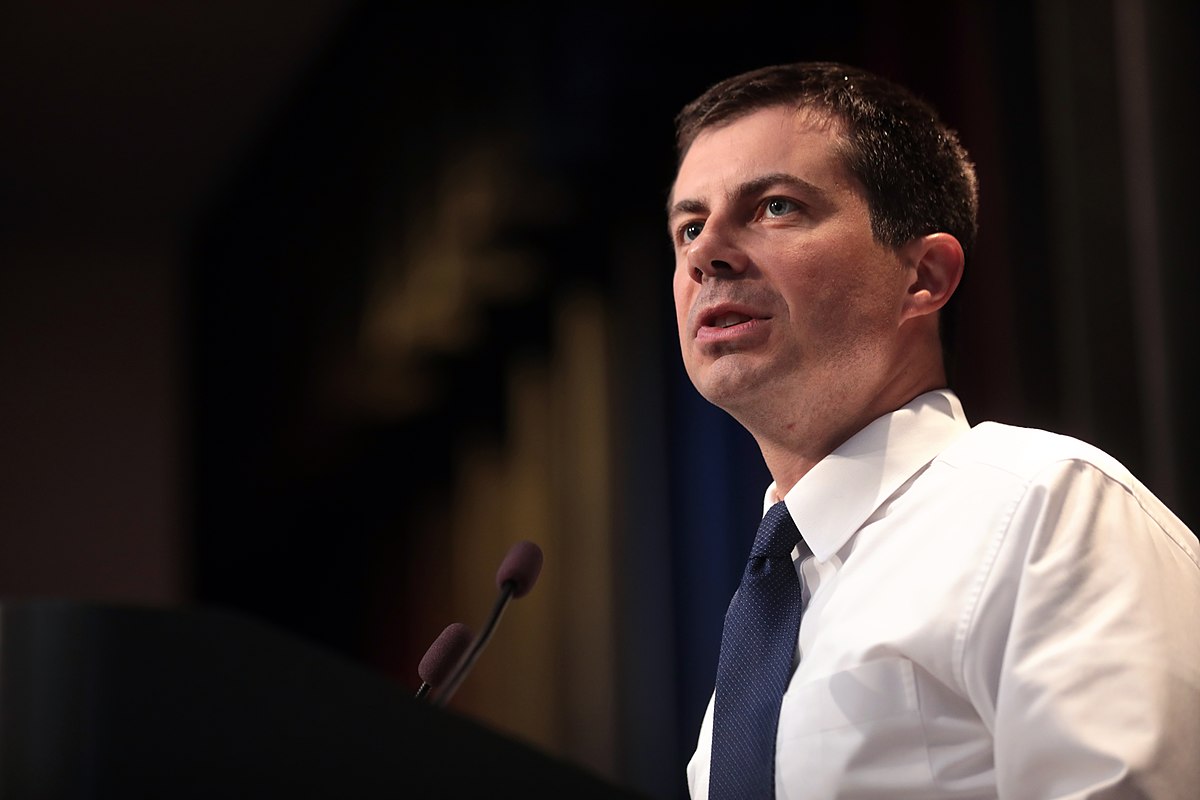 It is once again time for a Presidential Election! Time does sure go by fast, but in this case, I am certainly glad it is, as we need to get rid of the current occupant in the White House. I cannot even call him President because he has no presidential qualities at all, as far as this Editor is concerned, anyway. He has proven to be wholly incompetent for the job to which he was elected to serve the American people, and uphold the Constitution of the United States. In the three years, he has been in office, he has done neither.

Allegations, many proven, are now coming forth about this reprehensibly corrupt man and his merry minions. His allegiance clearly is only to his own financial gain for himself and his family, as well as his “associates” who are torn from the same cloth of corruption, graft, and generally much less than reputable attributes. He needs to be soundly and unequivocally defeated on November 3, 2020.

It is time to replace him with a Democratic candidate that understands what it means to be an American first and foremost, putting his personal financial welfare, and that of his family, behind the good of the nation. We need someone who understands the American people, their needs, what is troubling them and impacting their lives. We need youthful vibrancy, with new ideas, and a fresh perspective on what needs to be done to move our nation forward and to unquestioningly embrace the American ideals that have been so cemented in our lives through the generations, and throughout the world. That person is Mayor Pete Buttigieg.

Who is Mayor Pete? He is the 37-year-old current mayor of his hometown, South Bend, Indiana. He is also a veteran who proudly served our nation as a former Intelligence Officer in the Naval Reserve, as a former consultant for McKinsey & Company, and former Rhodes scholar. He also happens to be gay and married. Mayor Pete is the person we need to lead us, and to lift us up out of the wretchedness wrought upon our country by the current occupant of the White House.

He is too young! He has no experience! The nerve that he thinks he can win the White House! Delusional! No way will he ever win the nomination! These are many of the exclamations of ridicule I have been exposed to, as well as have those others who support this remarkably talented man. A man who has the audacity to believe so much in his country and its welfare, that he believes he can go from the Mayor’s Office of a Midwestern city to the White House, and be the leader of the free world.

Right on, I say! Why can’t he? This is what America is all about. We are a land where anyone can become whatever they want. Pete Buttigieg embodies the spirit of what this country is all about! President Barack Obama named Buttigieg as one of several future leaders of the Democratic Party. I wholeheartedly agree with the former President’s assessment of Mayor Pete. That is why we need him to be elected as the 46th President of the United States of America.

What does Pete Buttigieg stand for? What is he advocating? What are the issues that will be the foundations of his campaign and ultimately, his tenure in the White House? Let’s take a look, and you can decide whether to agree or not to give the reigns of power of our nation to Mayor Pete.

Medicare for All Who Want It

Health care is an important issue to most Americans, as verified in the 2018 Congressional Election which gave Democrats control of the House of Representatives. Health care fears and the loss of it was the overriding issue that led to the fall of GOP control of the House. While many support a Medicare for All Program, Mayor Pete has advocated a slightly different approach which preserves choice, since it is America after all, yet, will offer Americans a choice of a single-payer health care program, if one so chooses, through his Medicare for All Who Want It option. Having a single-payer option in the exchange will most certainly help provide more affordable coverage by offering Americans a competitive single-payer program. Forcing Americans onto a single-payer program is clearly not a palatable option … yet, anyway.

Increasing the Minimum Wage to $15.00/Hour

It is unconscionable that the minimum wage remains at $7.25/hour, and has been for the last 10 years. It is time to provide Americans with a working wage that will help them make ends meet better. Most candidates agree with Mayor Pete on increasing the minimum wage. He also supports the creation of retraining programs for workers as the nation continues to move further into an automated economy.

Mayor Pete’s Douglass Plan is inspired by American hero Frederick Douglass and comparable in scale to the Marshall Plan that rebuilt Europe after World War II.  It is a comprehensive and intentional dismantling of racist structures and systems combined with an equally intentional and affirmative investment of unprecedented scale in the freedom and self-determination of black Americans.

While he believes a 70 percent marginal tax rate, as proposed by some, may be divisive, and is open to negotiation, there is, regardless, a need to have the nation’s wealthy pay more of their fair share.

Supports the economic opportunities as identified in the Green New Deal.

Mayor Pete supports comprehensive immigration reform, a pathway to citizenship, a level of protection for dreamers, a set of reforms to clear up the bureaucracy, and reasonable measures on border security. He does not support open borders, as many other Democratic candidates do.

Mayor Pete believes the next president needs to be the strongest president ever on women’s rights and equality and gender inclusion. He supports the appointment of justices that support reproductive freedom, and pass laws that prevent states from taking away those freedoms. He also supports funding for sex education and birth control programs that make it so fewer women are confronted with a choice of whether to have an abortion or not. He believes in order to undertake all these initiatives, there is a need to have a president and an administration that believes in science.

Mayor Pete supports comprehensive background checks and opposes guns in schools and permitless carrying. He has been quoted as saying, “It’s one thing to own a gun. It’s another to worship it, like a false god, believing it will make you a bigger man.”

Mayor Pete supports the depoliticization of the Supreme Court. One option which he has advocated is to expand the Supreme Court to 15 justices with 10 appointed in the traditional manner via the US Senate, and 5 justices appointed by a unanimous agreement of the other 10 justices.

Mayor Pete diverges from many of the other Democratic candidates, in terms of a free college education. He supports the investment of $500 billion to make college affordable for working and middle-class families. The 80% of families of public college students that earn up to $100,000 will not pay any public college tuition. The next 10% of families, earning $100,000-$150,000, will get reduced public tuition on a sliding scale. To keep tuition costs in check, in exchange for receiving federal dollars states will guarantee to invest in their public higher education systems and constrain tuition increases.

Mayor Pete supports greater access to affordable housing for over seven million families and will continue to support federal homeownership programs that have created pathways to the middle class for millions of Americans. He will enable more than 2 million more units of affordable housing to be built or restored where it is needed most, using billions of dollars of investments in the Housing Trust Fund, Capital Magnet Fund, HOME and CDBG funds, and the Low Income Housing Tax Credit. He will enable one million low-income families to become homeowners by providing federal down payment assistance and matching funds to scale successful local programs. His administration will invest $170 billion to ensure that all eligible families with children receive housing choice vouchers and that they also have access to wraparound services that unlock high opportunity neighborhoods. And he’ll make critical investments in local infrastructure, education, and business development to ensure that every neighborhood is a neighborhood of opportunity.

Dignity and Security in Retirement

Based on his own personal experience, he knows how devastating long-term care can be for older Americans. He supports the establishment of a program called, “Long-Term Care America,” a historic long-term services and supports program. Those eligible will receive a fully-covered benefit of $90 per day for long-term care for as long as they need it. Of people currently, 65 or older, 11.3 million people will receive benefits from the program at some point in their life.

Mayor Pete supports creating automatic voter registration, making Election Day a federal holiday, and granting the people of Puerto Rico a say in the electoral process for the presidency.

These policy initiatives and ideas are just a small cross-section of what Mayor Pete is proposing. For more information on his plans, head to www.peteforamerica.com, his campaign website.

Also, in an effort to try to dispel the mistruth and the outright lie that Mayor Pete is a Republican, the graphic below should help do that.  He is far from being a Republican, and is a true blue PRAGMATIC PROGRESSIVE!  Don’t let those who wish to disparage and tell lies about Mayor Pete get away with it. 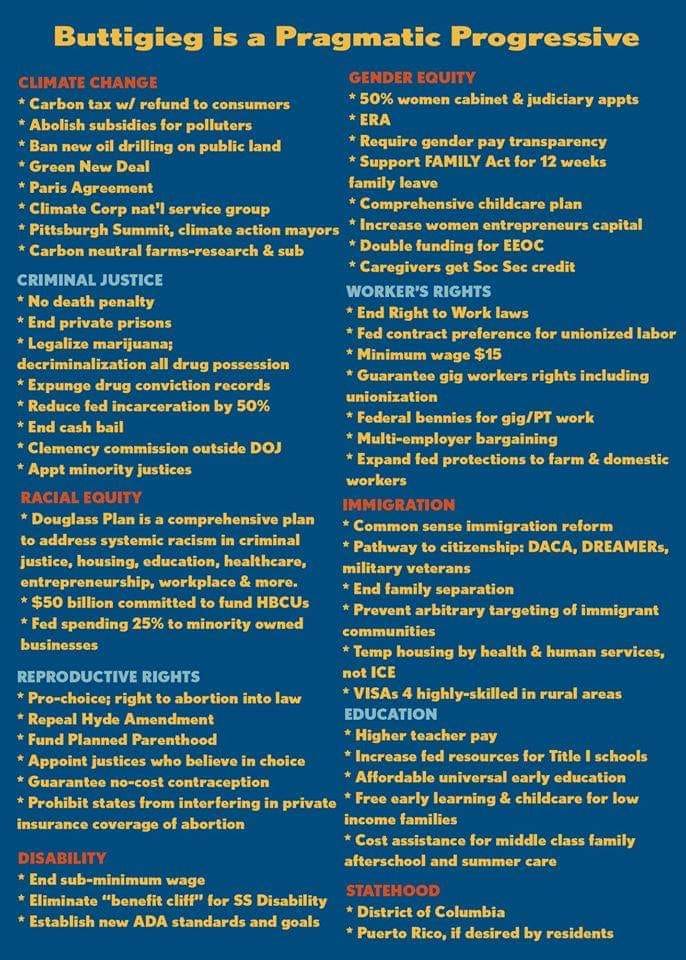 To sum up, Mayor Pete is right for America. While he may only be the mayor of South Bend, Indiana, his hometown, this editor/publisher, along with millions of others, believe he is totally capable of taking on the duties of the Office of President of the United States. He is deliberative, smart, and articulate, and has a firm grasp on the issues impacting the United States, and recognizes the evil that this current circus show has wrought upon our great nation. He is in the mold of John F. Kennedy, who has a vision for a better America. The time is now for Mayor Pete’s youthful vibrancy and fresh approach to the issues facing America. He is the generational change we so desperately need. I encourage you to vote for Mayor Pete Buttigieg in your respective state’s primaries.