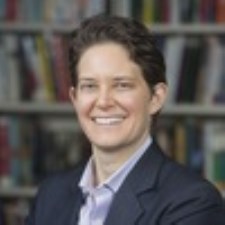 Dorie Clark is the author of “Reinventing You” and “Stand Out,” which was named the #1 Leadership Book of 2015 by Inc. magazine, one of the Top 10 Business Books of the Year by Forbes, and was a Washington Post bestseller. A former presidential campaign spokeswoman, she teaches at Duke University’s Fuqua School of Business. She is a frequent contributor to the Harvard Business Review and is a consultant and speaker for clients such as Google, Morgan Stanley, and the World Bank. She is also a Grammy-nominated jazz producer. Download her free 42-page Stand Out Self-Assessment Workbook and learn more at dorieclark.com.

The following article by Dorie Clark originally appeared on the Huffington Post on April 19, 2015, and was updated February 2, 2016.

For years, the dominant question for LGBT professionals was whether it was safe to be out at work. Though the battle is far from over — there are still 29 states where we can be fired for being gay and 32 for being transgender — the growing acceptance of gay marriage and the coming out of prominent executives like Apple’s Tim Cook has moved the discourse to the next level. The new question is, how can we best position ourselves for success as out professionals? In my new book Stand Out: How to Find Your Breakthrough Idea and Build a Following Around It, I discuss how to be recognized and respected for your strengths. Here are four strategies you can use to take your career to the next level.

1. Take control of your narrative

Particularly for LGBT professionals, there are plenty of people who are happy to tell our story for us — people who might question why “have to be so open about it” or why we’re “flaunting our identity.” Don’t assume that your good work speaks for itself. Instead, take control of your professional narrative by creating a one or two sentence description of where you’ve been in the past and how it adds value to what you’re doing in the present. Your narrative statement doesn’t need to involve your sexuality. The reason it’s important to have one is that it gives people an alternative story — the one you choose — for them to adopt, so that instead of thinking of you as “the gay one,” they’ll think of you as “the cross-cultural communication expert who’s using her skills to help grow our business in China.”

For professionals in any minority group, it’s important to have a base of supportive, trusted colleagues you can turn to. They don’t have to be other LGBT people (though they could be). What’s of paramount importance is that they accept your sexuality and see you, above all else, as a talented professional. They can give you the feedback and support you need to be successful, and give you an initial boost (through talking you up or helping you access new opportunities) that ensures the rest of the world recognizes your abilities, as well. For more detailed networking strategies, I recommend Never Eat Alone and Who’s Got Your Back? by openly gay author Keith Ferrazzi, for a particularly relevant take.

These days, hiring someone for a job or consulting engagement isn’t much different than deciding whether to go on a date with them: in almost all instances, you Google them first. That’s why it’s so critical to ensuring your online presence reflects who you really are and how you’d like to be seen by others. In just an hour or two a week, you can create a robust and professional online presence by, for instance, writing one blog post per week on your LinkedIn account about issues and trends in your profession, or maintaining a Twitter account where you curate and share relevant information about your field. When people look you up, you’ll be showing your best self.

In Stand Out, I profile Robbie Samuels, an openly transgender speaker and consultant who simultaneously made a name for himself and brought together the Boston nonprofit community by starting a popular meetup group called Socializing for Justice. He recognized that nonprofit advocates didn’t have enough casual, fun ways to come together, so he created one, launching biweekly events like Cocktails for Justice and Bowling for Justice. Within six weeks, 150 people were coming to each event; today, the group numbers more than 2500 members and has been running for nine years. Through the connections he made because of the group, Robbie was able to launch a side gig consulting, and eventually turned it into a full-time business. When you’re a convener, you help others make connections that matter to them – and they’re grateful to you for it.

Research by Sylvia Ann Hewlett and Karen Sumberg shows that openly gay employees may be more likely to succeed at work compared to their closeted counterparts, who expend too much energy worrying about managing their identity and how they’re perceived. Now that it’s increasingly accepted to be out, it’s time for LGBT professionals to move on to the next challenge: creating a powerful personal brand that marks them as leaders.

If you enjoy reading Diversity Rules Magazine, please consider subscribing, advertising or investing in its future