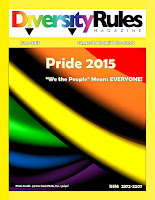 The June issue celebrates Pride Month! Get your pride on and celebrate who you are! Parades, festivals and parties will abound beginning in June and continuing through the summer months. Pride month should be a bit extra special with the pending Supreme Court decision that is widely expected to legalize same sex marriage throughout the United States.
We have come a long way since that hot, sultry night in New York City in 1969 where the modern day gay rights movement began with the riots at the Stonewall Inn. Remember those who fought for our rights and rebelled against police repression to claim their rights to be who they were.
The June issue contains a number of articles of interest about pride as well as a listing of pride events occurring in New York State. Also included in the June issue:
David-Elijah Nahmod: Diversity Rules Magazine welcomes David’s debut column entitled, “If You Could Read My Mind – A PTSD Memoir.”
Tony Guadagnino: Diversity Rules Magazine welcomes Tony’s debut column entitled, “Must We Get Married.”
Kristen MacKenzie: Kristen returns with her essay entitled, “Embracing Both.”
Amazon Trail: Lee Lynch’s next installment entitled, “Aging Tomboy.”
June Travel: Robert Saladarini’s next travel article talks about Nashville, TN.
Heading to San Diego: The folks from Purple Roofs take us on a trip to beautiful San Diego, California.
inQUEERies: Susan Thomas returns with her column “inQUEERies,’” helping queer folk with their challenges.
As you can see from the sampling above, the June issue is packed full of great information but you won’t be able to read it unless you subscribe, as Diversity Rules is now a subscription only publication. Don’t miss a single issue! Subscribe now at:
www.diversityrulesmagazine.com/subscribe.html
(Please note that the PRINT COPY IS ON HIATUS temporarily, however, subscriptions for the PRINT COPY can still be taken and will be honored when the PRINT COPY returns).
Single issues (through the August 2014 issue) are also available as well as an annual digital subscriptions for $2.95 and $4.95, respectively.
Diversity Rules can now be downloaded from the I-tunes APP Store.
The June issue is brought to you by these fine sponsors! Please let them know you found out about them from Diversity Rules Magazine:
Ace Lundon
Wayuga Printing and Publishing
Purple Roofs
Diversity Rules Magazine always welcomes your advertising support.
_______________________________________________________________
Subscribe to Diversity Rules Magazine TODAY at:
http://www.diversityrulesmagazine.com/subscribe.html
Diversity Rules Magazine is now available in the APP Store at:
https://itunes.apple.com/us/app/id711407008?mt=8