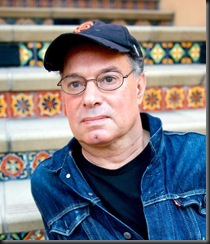 On April 1, 2015 I stood before Judge Charles Crompton in San Francisco Superior Court and requested a restraining order against a psychotic fan of the classic TV series Dark Shadows. Said fan, who claims to have been a “close friend” of series star Jonathan Frid, had been waging a slander and harassment campaign against me that went on for nearly five years. Though I blocked her on Facebook in 2010, she admitted to at least one person that she continues to “monitor” my page under a false identity. She contacted personal friends of mine in order to “warn” them about me. She urged people not to work with me in a professional capacity, gleefully telling anyone who would listen all about how “sick” I am.

I guess there’s a grain of truth to the “sickness” claims–I do, after all, live with PTSD, Post Traumatic Stress Disorder. As I wrote in the first edition of this column, I developed PTSD after my parents subjected my to gay conversion therapy and years of religious mental abuse during my childhood. What my parents did to me, and what happened to me as a result, was the weapon my tormenter chose to use against me.

You have to wonder what kind of a person would do such a thing. What kind of an upbringing did she have? Did her parents not teach her the difference between right from wrong?

Since last summer Jonathan Frid’s “dear friend” escalated her campaign of bullying and hate. Her primary issue became Dark Shadows’ LGBT Connection, a column I had written for Fangoria Magazine about the show’s massive gay fan base, and what Jonathan Frid’s status as a gay actor meant to them. My tormenter was enraged–she claimed that I “outed”  Mr. Frid, never mind that publications such as Huffington Post, Village Voice and many others had written about his homosexuality long before I had. She escalated her rampage in order to protect her idol’s legacy from the “evil scourge” of homosexuality. In her world it’s offensive and disturbing to say that a gay man was gay, but bullying, threatening and slandering people in his name is considered acceptable.

When I went before Judge Crompton I held in my hand a letter from the doctor who treats my PTSD. The letter urged that the restraining order be granted–the doctor stated that the conduct of Mr. Frid’s friend posed a danger to my health. I also had emails sent to me from my tormenter’s personal email account: she was threatening to contact my employers.

Because of a minor clerical error in my court filings, Judge Crompton dismissed by request “with prejudice”–meaning that I cannot refile the request. The judge was offered my documents but he ignored them. Less than twenty four hours later my tormenter contacted me (and others) several times to gloat about her “victory.”  She ridiculed my PTSD and said that I’m a con artist for claiming to be disabled.

I am in fact considered disabled by federal law because of my PTSD diagnosis. I am entitled to access disabled services and am afforded legal protections under the Americans With Disabilities Act–Judge Crompton is now being investigated for possible ADA violation after his deplorable conduct regarding my case.

I do retain the right to refile another restraining order request on the basis of Mr. Frid’s friend continued attempts to provoke and torment me. She acts with the full support of the organizers of the Dark Shadows Festivals, the annual fan gatherings, while cast members from the show knowingly look the other way.

It’s disturbing to see how maliciously cruel people can be. As I noted in an earlier column, Dark Shadows fandom is rife with this kind of behavior. LGBT identified Dark Shadows fans are routinely bullied into being “discreet”, but things can go much further than that.

“A lot of the fans do go out of their way to hurt each other,” lifelong Dark Shadows fan Heidi Jo Helmick told me. “I would say that homophobia plays a part in this to a degree.”

Helmick is a straight woman. She lives with cerebral palsy and clinical depression–she says that she occasionally struggles against suicidal thoughts. Her issues are well known, yet she has also endured vicious personal attacks and threats from the self-appointed protector of Jonathan Frid’s legacy.

Dark Shadows fan Carole Hollingsworth, a Wicca, shared with me the incidents in which she was attacked and bullied by Christian identified fans of Dark Shadows–these attacks took place in public Facebook postings, and in a barrage of private messages in which she was urged to “repent”.

“The bullying was horrible”, Hollingsworth, who is a staunch LGBT ally, told me. “You can’t help but feel that most of them had to be on pretty shaky ground faith-wise if the likes of a mere Wicca like myself could upset them that much.”

Hollingworth noted that gay fans, and fans who claim to support LGBT equality, did nothing in her defense. “I certainly noted the hypocrisy that ran rampant on that page,” she said.

It is in fact a regular occurrence in Dark Shadows fandom to see people who claim to support LGBT equality and even people who are themselves LGBT enabling or taking part in anti-gay attacks, just so they can be one of the “cool kids” in the Dark Shadows sandbox. But these aren’t “kids”–many of them are forty, fifty and even sixty years old.

Another Dark Shadows fan, Dale Bellinghausen, shared his own stories about being attacked and bullied in various corners of the Dark Shadows universe.

“I think a lot of them derive pleasure from this,” he said of his attackers.

Now, nearly fifty years after I ran home from school to watch Dark Shadows, I can only express regret that I involved myself in fandom. I’m sorry that I joined the chatrooms  and attended the fan events. I’m sorry that I used my podium as a journalist in support of a franchise that’s been a catalyst for so much ugliness. It’s bad enough to see people lunging at each other’s throats over religious and/or political disagreements. To see this kind of hate being perpetrated over who’s the more loyal fan of a TV show which is not only pathetic, it a sad reminder of why mental health issues need to be taken more seriously.

I still love Dark Shadows. Tomorrow I’ll be meeting with three local friends for a Dark Shadows DVD party. I expect that, as before, the wine will flow as we pass around a few joints and enjoy our favorite show. None of us are part of that toxic cesspool of hate known as “fandom”. With them I’m creating new and better memories.

Before I leave for tomorrow’s gathering, I’ll be doing what I always do on the days that we meet. I’ll be lighting a candle for Jonathan Frid’s “best friend” while I recite a short meditational prayer. I hope that the Universe helps this cruel woman to see the error in her ways and elevates her to a higher level.

2 thoughts on “If You Could Read My Mind”