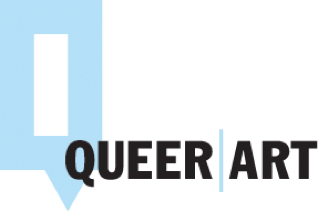 Queer|Art is pleased to announce that the grant will also provide a $1,250 award to four finalists, in addition to the $10,000 awarded to a winner each year. The winning artist will receive professional development resources, including a studio visit with each participating judge, to bolster their creative development in the field.

Jonathan Lyndon Chase is an interdisciplinary artist who works in painting,  video, sound, and sculpture to depict queer black love and community amidst the backdrop of urban and domestic spaces. Chase’s figures hang in various forms of articulation intertwined with domestic markers of a kitchen or a bedroom, they are then tethered by pop and street signage to blend emotional and physical, internal and external states of being. Rendered through layers of bright, visceral paint, make-up, foam, and glitter these compositions challenge and subvert canonical misrepresentation and exclusion of the black body. Recent exhibitions include WHAT DO YOU SEE, YOU PEOPLE, GAZING AT ME at  Sadie Coles HQ, London. Chase’s work has been previously featured in Art Basel,  Switzerland; Fabric Workshop and Museum, Philadelphia; Philadelphia Museum of  Art, Pond Society (solo), Shanghai; Company Gallery, New York; LSU Museum of Art  (solo), Baton Rouge; the Rubell Foundation, Miami; Taubman Museum of Art, Roanoke;  California African American Museum, Los Angeles; Woodmere Art Museum, Philadelphia; The Bunker, Collection of Beth Rudin De-Woody, Palm Beach and Pennsylvania Academy of the Fine Art, Philadelphia. Their work is included in numerous private and public collections such as the Whitney Museum of American Art, Walker Art Center, ICA Miami, High Art Museum, Los Angeles County Museum of Art, Bronx Museum, Rubell Family Collection, Buxton Contemporary Art Museum, The Wedge Collection, Pennsylvania Academy of Fine Art and Woodmere Museum of Art. Chase was born in 1989 in Philadelphia, PA where they currently live and work.

Kimberly Drew is a writer, curator, and activist. Drew received her B.A. from Smith College in Art History and African-American Studies. She first experienced the art world as an intern in the Director’s Office of The Studio Museum in Harlem. Her time at the Studio Museum inspired her to start the Tumblr blog, Black Contemporary Art, sparking her interest in social media. Drew’s writing has appeared in Vanity Fair, Vogue, Glamour, Playboy, and Teen Vogue and she has executed Instagram takeovers for Prada, The White House, and Instagram. Drew served as the Social Media Manager at The Met. She is the co-editor of Black Futures which she published in 2020 with Jenna Wortham. Drew recently joined Pace Gallery as Associate Director. You can follow her at @museummammy on Instagram and Twitter.

Connie (Girl) Fleming is a performer, model, stylist, fashion illustrator, and undeniable New York City legend. As a renowned stage performer, she has graced iconic nightlife venues like the Palladium, the Tunnel, and the Pyramid; performed in various videos for George Michael, Chic, and Jody Watley; and appeared in the opening montages for Saturday Night Live and MTV News. Connie’s status as a fashion icon and cultural muse has led her to model for Thierry Mugler, Vivienne Westwood, and Andre Walker across New York and Paris. A charter member of the House of Field and a Mistress of Ceremonies at Jackie 60, Connie began her reign as one of New York’s most sought-after gatekeepers when she worked the door at Eric Conrad’s Poop at the Supper Club. Her inimitable fashion drawings have been used to illustrate costumes for Beyoncé, Anastasia, Swarovski, and “The Devil Wears Prada,” among others. Today, Connie splits her time between various artistic endeavors and works as a runway coach, producer, and casting director for several fashion brands in New York and abroad.

About The Illuminations Grant

The Illuminations Grant is awarded to draw attention to an existing body of work. Qualified artists must be self-identified Black trans women and trans femmes who are early-career working in visual art and based in the United States. Applications are open from March 31, 2022-June 30, 2022 and the grant will be awarded in September 2022.

The Illuminations Grant defines visual art broadly to include art forms including, but not limited to: ceramics, drawing, painting, sculpture, printmaking, photography, and fiber arts. While this grant is particularly interested in supporting artists working within 2D and 3D art forms, time-based mediums, such as video/film may also be considered.

Queer|Art was born out of the recognition of a generation of artists and audiences lost to the ongoing AIDS crisis, and in a profound understanding that one of the many repercussions of that loss has been a lack of mentors and role models for a new generation of LGBTQ+ artists.

Founded in 2009 by filmmaker Ira Sachs, Queer|Art serves as ballast against this loss and seeks to highlight and address a continuing fundamental lack of both economic and institutional support for LGBTQ+ artists. Our mission is to connect and empower generations of LGBTQ+ artists while providing the tools, resources, and guidance artists need to achieve success and visibility for their work at the highest levels of their field.

The current programs of Queer|Art include the year-long Queer|Art|Mentorship program; the long-running Queer|Art|Film series, held monthly at the IFC Center in lower Manhattan; and Queer|Art|Awards, an initiative of grants, prizes, and awards that provides various kinds of direct support—monetary and otherwise—to LGBTQ+ artists.