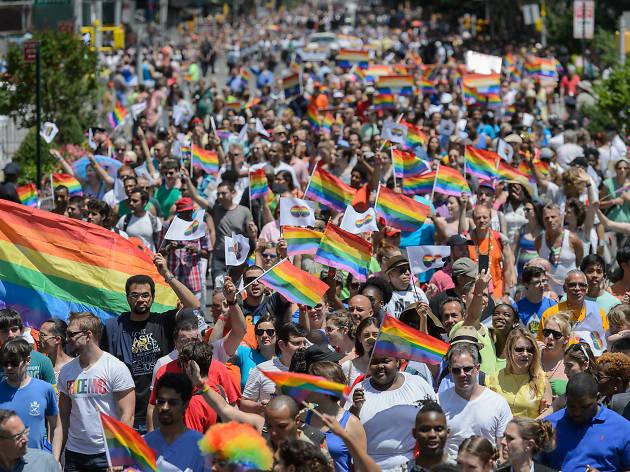 The Following Article Was Provided By TopView Sightseeing

Some people love Christmas when the city is decorated with lights and snowflakes, and the cool wind makes everyone walk just a little faster. Some people love autumn when the trees in the parks are turning their shades of red and gold, and the shortening days drag the brutally fast pace of the city just a bit slower, trying to hold on to the remainders of the warmth of summer. But for us, our favorite time of the year in New York City is the last two weeks of June, when the city, decked out in rainbows and glitter, comes together to protest the ongoing mistreatment of queer citizens, and simultaneously to celebrate the progress we’ve made along the way. Pride Week is the best time to be in New York City, hard stop.

For the first time ever, Pride Week NYC will open this year with the Human Rights Conference, at the SUNY Global Center on June 16th. This exciting gathering of activists, artists, lawmakers, and others actively engaging with queer human rights around the world will provide a new platform for a global discourse on human rights.

On June 18, OutCinema will showcase a uniquely curated queer film at the SVA Theatre on 23rd Street, and will celebrate LGBTQ+ pride onscreen. The next night, Family Movie Night at the Christopher Street Pier will host a screening of Disney ’s. Beauty and the Beast for LGBTQIA+ families and children.

The March, commonly known as the Pride Parade, will celebrate the 49th Anniversary of the Stonewall Uprising with a newly extended route. It’ll be lengthened from its normal end at Stonewall on Christopher up to a few blocks north of the AIDS Memorial at 13th and 7th. If you are planning to go out on this day, either on a bus or on a bike, keep in mind the changes the parade may bring. The March is a celebration of queer lives and queer community that joyfully raises up our progress, but also highlights how far we still have to go. First held in 1970 in response to the categorical mistreatment of gay men by the New York Police Force, the annual civil rights demonstration has broadened its purpose to recognize the fight against HIV/AIDS and to memorialize those who we have lost to illness, violence, neglect, and human rights violations.

For those looking to celebrate the occasion in a bar or nightclub, there are seemingly hundreds of opportunities across the city, with options for every level of interest and intensity. Most of the gay bars in Hell’s Kitchen and the West Village will have their party info on their social media, and many will require pre-purchased tickets just for entry, which do not include drinks. Make sure to buy your tickets in advance, and bring cash to tip your bartenders.

For a less wild Pride Week, check out what Pride-related activities your favorite museum might have going on, or see if any of the independent film houses or theatre companies are having special Pride Week screenings or performances.

Pride Week in New York is about celebrating queer history in exactly the way you want to celebrate. If a party seems like it might be too much for you, I guarantee there’s an option more suited to your needs. Celebrate your queer self! And remember how far we’ve come!