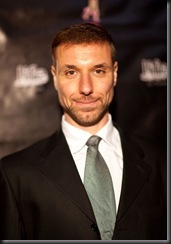 Eric Casaccio and his film “Freak” first appeared in Diversity Rules in the November 2011 issue.  Since then,  “Freak” has screened on the festival circuit and will continue to do so for the rest of 2012, and possibly into 2013.

Tell me a bit about yourself and how you got involved in the entertainment industry:

It’s funny. When I first started doing interviews, I always used to say that it all began with my first acting class at Palm Beach Community College. I’ve come to the conclusion that it really started with the lonely kid I was in fifth grade, a giant VHS video camera, and the love of re-enacting scenes from some of my favorite films. And yes, if that VHS tape is ever found and put up on You-Tube, I will be going into hiding somewhere. [:)]

What compelled you to create the film?

I love this question. I get it in every interview and I actually discover something new every time I answer it. Recently, a Facebook friend (that attended a screening of “Freak”) posted a picture on my wall that states “FREAK: A person who is envied because they are a fabulously unique individual that can kick ass and has no need or desire to follow the flock.” When I first read this, I just smiled and commented “Couldn’t of said it better myself”. I wanted to show how being an outcast can be a gift, and to never give up on your dreams no matter what. I would never of been able to tell this story if I “followed the flock” like everyone else and am beyond proud of the acclaim it has received. It started out as a dream with a tripod, a camera, and a light that lead to over twenty-five festival selections (so far), twelve awards, and recognition I never would have imagined. A special thanks to my family and friends that always believed in me. I couldn’t have done it without you.

What challenges did you face while laying the groundwork for production of the film?

There were really no major challenges in the groundwork. Prior to shooting, I went into this totally prepared with my actors rehearsed and a detailed shot list. The biggest challenge of the whole production was the sound around the location. I shot this entire film inside and outside my apartment and in pre-production, I never thought about what the outside noises would be like (neighbors, lawn mowers, etc.). Due to a wardrobe issue, I had to re-shoot the final scene of the film. Not being an avid sports fan of any kind, I had no idea the Olympics were that day and the cheering going on around my building was definitely an issue. We actually spent more time holding for sound then shooting, but got exactly what we needed for the final scene. I look at creating art like a celebration. Even in moments like this, we all still remembered to have fun. A shout out to my fabulous cast and crew. You guys rock!

What’s coming up next for Eric Casaccio?

“Freak” will continue to screen on the festival circuit for the rest of 2012 and possibly some of 2013. Last year I wrote another short screenplay about bullying and began the groundwork for pre-production until a full-length idea of the story came to mind. I am dedicating myself to writing this feature and don’t want to consider shooting it until the draft I have is beyond solid. So stay tuned, there will indeed be more to come!