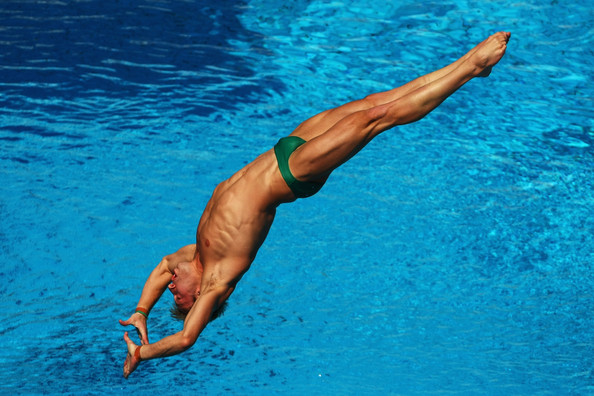 Matthew Mitcham was a star in the 2008 summer Olympics. Born in Australia, he was “the one to watch” in Beijing, which proved to come true. His performance on the platform made him the first openly gay athlete to win an Olympic gold medal.

Born in 1988, Matthew began his young career as a trampoline gymnast before being spotted by a coach of the Australian Institute of Sport Diving Program. Instead of transitioning to diving, Matthew decided to perform in both sports. At the age of young age of 12 (and 14), Matthew represented Australia at the World Junior Championships and won the double mini-tramp event. It became apparent that his experience on the trampoline aided in making him a superstar above the swimming pool.

From 2002 through 2004, Matthew was a national junior champion in diving, winning all of the events in which he competed. Also in 2004, when he was just 16 years old, he won silver medals in the 1m springboard, 3m synchronized, and 10m platform events at the World Junior Championships. At the Junior Nationals of the same year, Matthew won the 1m, 3m, 10m, and 3m synchronized titles. A year later, at the age of 17, Matthew won his first senior national title at the 2005 World Aquatics Championship. Matthew was poised to win a medal for the next summer Olympic games.

During the qualification rounds, Matthew did qualify in the second position for the semi-final and the final of the 10m platform event. After some unexpected and underachieving success in his first five dives, Matthew entered the final round of dives in 2nd place, 34 points behind the leader (China diver Zhou Lüxin). After Zhou performed his worst dive of the final round and scored 74.80, Matthew still needed to score 107.30 to win the gold medal. With a spectator crowd so quiet that you can hear a pin drop, Matthew performed a near-perfect dive, scored four perfect 10’s, and achieved a score of 112.10, THE HIGHEST SINGLE DIVE SCORE IN OLYMPIC HISTORY. He finished with an overall score of 537.95 and defeated Zhou. Matthew Mitcham became the first Australian male to win an Olympic gold medal diving in 1924 (84 years), which was won by Dick Eve.

In 2016, Matthew retired from the sport, deciding to pursue a career in showbiz. He has appeared on some local Australian broadcasts and reality shows (like their version of Dancing With The Stars, and a celebrity judge on the Australian show Celebrity Splash!, a reality show where actors competed in diving competitions.

Besides scoring the highest in a single dive, Matthew was also the first out gay man to compete in the Olympics. He first publicly came out to the Sydney Morning Herald during a segment on Australian Olympic hopefuls. During the Olympics, he was featured on the cover of The Advocate and the cover of DNA, an Australian gay publication. When questioned about his sexuality, he was quoted as saying the following:

“I don’t see sexuality as influencing my beliefs or opinions or perceptions of anybody, whether they’re gay, straight, bi, trans, experimental, I don’t care. I see it as a very uninfluential factor in people.”

Today, Matthew lives in Sydney and is married to Luke Rutherford. He lives a happy life and revels in being a pioneer for the LGBT community in the field of diving.