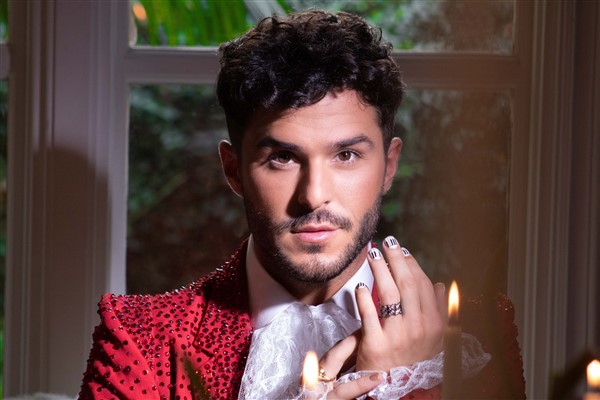 He says “Give a F-ck” and all of the songs from his upcoming visual EP are true reflections of himself as an artist. “I’m not attached to my success. I’m simply making music and visuals that I want to see in the world. I hope that maybe this song helps listeners feel empowered by their own desires, worth, and boundaries. That would be hot.”

“Give a F-ck” is being distributed independently and is available on Apple Music, Spotify, and all digital platforms. Its video is available on iTunes, Vimeo, and YouTube.

JRK: Before we get into the interview can you tell readers a bit about John Duff, where you are from, and all that good introductory stuff?

JD: You know, I’m starting to wonder if introductory stuff is actually good stuff. It seems like everyone likes a mystery, but alas I have already given so much of myself away… so it won’t hurt to tell you that I grew up outside of Baltimore Maryland. Ha. I did my first talent show when I was eight, got a BFA in musical theatre, worked as an actor in NYC for six years, and moved to LA four years ago to pursue music. That’s the extremely abridged version.

JRK: You have stated that the main message in your existence as an artist is to do “whatever you want as long as you don’t kill anyone, steal, violate, or drink and drive.” How do you embody that mantra in your day-to-day life?

JD: People are really hard on themselves. Many of my friends are convinced that they’re horrible people, and I’m like – you’re not.

You’re not even doing horrible things. It’s about the awareness that we are not bad people simply because we are human. Guilt and shame are enforced, in pretty much every culture, from a very young age. But that’s counterproductive – so long as we aren’t being negligent with other peoples’ experiences, we’re doing ok. You wanna wear a dress – great. You wanna be a slut – rock on. You wanna have too much to drink – ok, so long as you’re not driving or ruining everyone else’s night: who cares. Do unto others what you would have them do to you. These are just the super basic principles of most of the religions and spiritual practices: don’t be an asshole, honor yourself.

JRK: Earlier this fall, you released the first single off your yet unnamed EP entitled, “Hokie Pokie.” Can you tell us what that is about?

It’s kind of crazy, because WAP came out like a week after we shot the video – had WAP come out before the video shoot, I’m not sure I ever would have released “Hokie Pokie”. I felt slighted when it came out, because everything just kind of called it “gay WAP” – I was fully aware that would happen, but still it sucks to be reduced to a parody artist when I’m actually incredibly creative and do not need to utilize satirical devices to get attention.

JRK: Your latest track is “Give a F*ck.” What is the new track about and how does it compare with “Hokie Pokie?”

JD: Both songs say the same thing, more or less. If you want my love, here are my conditions. Give a Fuck is about commitment, though. I’m not saying I’m a puritan (I specifically say I am not in the lyrics). I’ve had all sorts of sex in my life: nine times out of ten – random sex ain’t for me. I’m a prude, by gay standards. And I like that. I have a moral opposition to sharing my energy with people I do not have a connection with. So “Give a Fuck” is much more me than “Hokie Pokie.” I’m also just so proud of “Give a Fuck” as a piece – there’s nothing wrong with it.

JRK: Growing up in a suburb outside of Baltimore, MD, you stated you were bullied. Can you tell us how you were bullied, and how it impacted you? How has the bullying made you grow as the unique individual you are?

In middle school, I contemplated killing myself – and that wasn’t because I hated me. I just wanted to be left alone. I couldn’t stop being my extra self – and I didn’t want to. I just wanted peace. I still want peace.

My childhood led to decades of confusion. Trying to assimilate, to fit. The drinking started at 17 – blackouts from the start. I took on characteristics of the kids that bullied me, they were normal after all.

Ideation, addiction, mania, and depression took precedent in my 20s… but here I am. I’ve worked really hard the past few years on myself, and I finally quit the booze – which was my crutch, big time.

I don’t think any of this makes me unique. We all have our own version of trauma. What makes me unique is that I am healing. I am the best I’ve ever been. All of those cuts are just scars now. Faint scars. I have no more time for the pity party.

JRK: You auditioned on the “X-Factor,” and it did not turn out all that well, since you have described it as “the most degrading and humiliating experience” of your life? Can you tell us a bit about that, and how did you take that rejection to empower yourself to succeed?

JD: It’s funny. It was 2011. Big year for self-acceptance anthems. You had “Firework,” “Born this Way,” “We r Who We r,” “Raise Your Glass”… the list goes on. Now – here I am standing on the stage in front of 4000 people being called “strange” and transgender by power players in this industry who are profiting off of said self-acceptance songs. They had nothing to say about my talent. Their only comments were about my person.

I was no stranger to rejection. I’d never played a lead in my high school shows – I was even cut from shows, I didn’t get into any colleges the first time I auditioned, they didn’t like me very much in college once I got into one… but this experience was something else altogether. It was hateful.

I think it’s important to note, this was a different time. Reality tv wasn’t woke. They didn’t have gay contestants unless it was for a joke. I was just a joke to them.

I nearly killed myself, but God or the universe or whoever we want to call it continually put me back on track.

I got a job in a musical in New York while riding the subway a couple of months after. That’s a crazy story – and one of the reasons I have such faith. That job led me to years of work, where I restored my confidence in front of a live New York audience every night.

Resilience is survival. I’ve never loved anything except for music and performance. As long as I’m here, that’s what I’m going to do. I don’t enjoy most other things.

JRK: You have stated that the first two independent videos as an independent artist did not accurately reflect you. Can you tell us more about that and how they mischaracterized you?

JD: Truth be told, every video so far could be deemed a mischaracterization. As I really reflect on it, I don’t think any of them are a mischaracterization though. They’re more reflections of a person that I am not anymore. And that goes for “Hokie Pokie” too. These videos were healing for me. I needed to do it for my inner child, and for that 21-year-old me that got laughed off the XFactor stage. I needed to show myself that it could work, and I did. Now I can move on and grow up.

JRK: You have been quoted as saying that you are “not attached to your success.” Can you explain that a bit further?

JD: I’m attached to the quality of my work. I’m attached to the execution of my ideas. Success is relative – and when I say I’m not attached to the success, I mean that once I’ve created something that lives up to my standards: I’m already successful. How other people perceive that is none of my business. But it’s all worthy of an audience, however big or small that audience may be.

JRK: Your story is one of resilience. What advice can you give to struggling artists or others who have been bullied, or who are just trying to grasp success in their chosen fields, to be resilient, and to forge ahead?

JD: You’ve got to take time to nurture yourself. I talk to myself like a child. We have these nasty loops that play in our heads – “you’re so stupid”, “you’re unlovable”, blah blah blah. If you were talking to a picture of yourself from when you were five – you would never say those things to that kid. Never. But you are that kid. So be patient with them, bring them up to speed. Honor them.

JRK: Do you have any parting thoughts you would like to leave with readers?

JD: This is all a journey. I’m on it – you are too. A crazy mysterious journey, bogged down by this centuries-old game of money and politics and hatred. But we’re all just animals. We dress it up, we “get our shit together”… but our shit will never be together. The best we can do is be kind to ourselves and the people around us. RuPaul is not wrong when he says “you’re born naked and the rest is drag.” Make someone happy… YOU are someone.