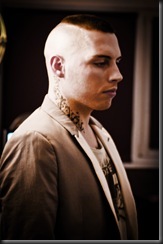 Craig Cavanagh is a singer/songwriter from Liverpool, UK, who was shortlisted to the final voting stages of MTV Brand New Unsigned competition in 2012. His debut EP was released 03/03/2013 onto iTunes and other outlets.

The EP which is called ‘Green Eyed Soul’ was co-written and produced with Bradley Mair from Mairco Music and Extenso Music Unlimited. Bradley heard his song ‘Rise Again’ on the MTV competition and asked if he could work with him on re-recording the track as he had fallen in love with it and maybe write another track together (which ended up being 3 more tracks).

He is releasing a brand new single entitled “Soar Higher” on 14th July. It is an inspirational track which is also hard hitting and a different flavour to his other tracks, but keeps true to him and contains several

‘Beyoncé – Love On Top’ key changes throughout. The song will be used as an entrance song for a cage fighter named ‘Danny Hot Chocolate Roberts’ when he fights in Liverpool’s Echo Arena on the worldwide televised event ‘Cage Warriors’ a week later on 20th July 2013. Around 105 million people are expected to tune in.

A review by one of his fans from San Francisco, JP Leddy, in his blog, “TasiThought’s Weblog,” sums up Craig’s music brilliantly:

“His music is filled with rich lyrics and haunting tones, even with the  upbeat like Pon Me (my favorite).  His voice range is wide and he hits notes that reflect emotion that carries through, soulful with depth.

A choir boy from Liverpool, England, Cavanagh is able to write his songs like paint on a canvas that each note that tends toward the higher register without being loud or showy, yet deep with resolution.”

Craig’s EP is available on iTunes, and Diversity Rules Magazine encourages its readers to download Craig’s hauntingly melodic tunes and listen to them over and over again!

Make sure you tell him Diversity Rules sent ya!

Make sure you don’t miss Craig’s feature and all the other great articles and information in the June issue.  You best subscribe NOW.  Queer Pride Month Special:  Subscribe during the month of June and get 15 issues for the price of 12 PLUS a digital subscription for yourself AND a friend — 2 for the price of one.  Subscribe online at: