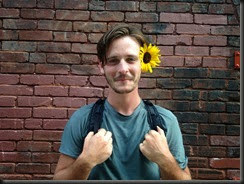 Diversity Rules Magazine has always been grounded in a mission to educate and inform the public about issues and concerns relevant to the gay community and its allies as well as to be an advocate for justice and fair treatment for all.  In September Diversity Rules Magazine is honored and humbled to take up the cause of Luke O’Donovan who was the victim of a hate crime and ended up going to jail for protecting himself from his attackers.  Luke’s case is just one of many injustices that the gay community must endure at the hands of a bigoted and prejudiced society, and in this case, legal system.  Diversity Rules Magazine hopes spreading the word about Luke’s case will help raise needed cash to defend Luke and ultimately to release him from this nightmare he has been forced to endure.  The editor/publisher is asking all Diversity Rules readers and those who support equality and justice for all to spread Luke’s message as far and wide as you can and bring to light the horrific injustice done to this man at the hands of a homophobic and reactionary justice system in Georgia.  Luke’s story……

On December 31, 2012, O’Donovan was attacked, beaten and stabbed by at least five men shouting homophobic slurs at a New Year’s Eve party. O’Donovan defended himself with a pocketknife and left the scene, receiving treatment for stab wounds and injuries to his head and body at the Atlanta Medical Center. Hours later, police arrested O’Donovan as he was receiving treatment, charging him five counts of felony aggravated assault with a deadly weapon.  A superseding charge of attempted murder was handed down to O’Donovan at a later date.

On August 12, 2014, O’Donovan was sentenced to prison for 10 years through a negotiated plea deal on charges that he assaulted those who attacked him.

“This is the epitome of a hate crime. Witnesses report seeing between five and 12 men attacking O’Donovan, stomping on his head and body, and stabbing him in the back while calling him a ‘faggot.’

“The facts of this case were clearly biased due to the group nature of the attack and the complicity of some onlookers. The demonization of O’Donovan’s actions is apart of a growing trend: criminalizing those who successfully defend themselves from hate crimes.

“O’Donovan’s defense team was only able to negotiate the 10-year sentence after video footage surfaced of one of O’Donovan’s assailants participating in an attack of a transgender woman on July 3.

“These arduous court proceedings have illustrated that the court and the presiding judge are homophobic. During O’Donovan’s July 1 immunity hearing, Judge Markle allowed the prosecution to use bigoted language in open court, asking every witness if the term “faggot” was offensive or just a synonym for other “non-offensive” terms like “pussies,” “bitches,” or “nigger.” Before sentencing O’Donovan, Judge Markle stated that the 10- year sentence is much too lenient, and despite agreeing to the plea negotiated by the Defense and the Prosecution, Judge Markle added an arcane, punitive stipulation effectively “banishing” O’Donovan from the state of Georgia during the eight years of his probation.

“Homophobic and transphobic attacks in Atlanta are becoming more prevalent. For example, earlier this summer, a group of men accosted, beat, and stripped two transgender women nude on a MARTA train.

“O’Donovan’s case has received little media coverage in Atlanta or nationally. During the ‘victim impact statements’ yesterday, Cheryl Mainor, mother of one of O’Donovan’s attackers, admitted to using her professional connections to suppress media stories about the case.”

The Luke O’Donovan Support Committee is asking Judge Markle to remove the criminal banishment from Luke’s probationary conditions. Supporters are encouraged to contact Judge Markle directly and to send letters and books to Luke O’Donovan throughout his sentence.