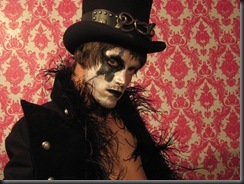 Rob Ordonez is a truly self -styled artiste.  It’s been said that he gets most of his artistic inspiration from walking around New York City, where the legions of urban trendsetters with tattoos, piercings, wild hair, and renegade fashion sense give him as much food for thought as teh vendors in Union Square’s Greenmarket.  A true Renaissance man, Ordonez is a model and actor as well as an acclaimed photographer.  He enjoys being both in front of and behind the camera equally.  Ordonez does not retouch his photos, preferring a more organic, natural vibe.  Through the years, he has self-published seven books, which featured his photography.  For a photo session or to book him as a model, get in touch with him at:  [email protected].

To find out more about Rob go to his website at:  http://robertordonez.yolasite.com/about-robert-ordonez.php