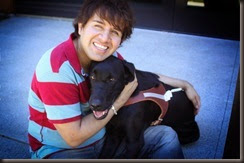 In the spring of 2007, Belo Cipriani, a young gay man living in San Francisco, was beaten and robbed of his sight at the hands of his gay friends. At the age of twenty-six, he was forced to relearn how to walk, cook, and date – in the dark. “When I became blind, I realized that everything I knew about blindness was inaccurate,” he explains today. “Many of my erroneous assumptions about blindness had been created by Hollywood and novels and I wanted to put something out that properly portrayed what it’s like to lose your sight in the 21st century. In his first book, Blind: A Memoir, Belo Cipriani chronicles the two years immediately following his assault.

“Disability doesn’t mean the end of someone’s life,” he continues. In his book, Belo narrates the recondite 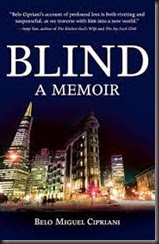 world of the blind, where microwaves, watches, and computers talk, and guide dogs guard as well as lead. Readers learn about new apps that can describe colors, decode money, and allow the blind to text messages.

On the flip side, we learn about areas that have not been addressed yet. There are no apps that make dating easier for the blind. Belo relies on meeting men through friends, at public events, or through social media, which can be challenging.

“Blindness makes it tough to flirt with guys in public,” he says. “I’m forced to get to know someone’s personality before I know what he looks like and if I’m attracted to him physically. After all, I can’t always put my hands on people’s faces,” he laughs.

He feels the gay community has been slow to embrace people with disabilities and is anxious to see some on the covers of LGBT magazines and newspapers, and cast as actors and characters in LGBT independent cinema.

Belo is also a frequent lecturer at colleges. Most recently, he was a keynote speaker at Yale University, as part of their Hispanic Heritage Month celebration. He spoke to students about how the Latino culture shaped his journey in becoming a writer. During National Disability Awareness Month, he addressed the students at the University of San Francisco about the appropriate ways to interact with disabled people.

It’s an especially sensitive topic for Belo as he feels most people remain blind to the challenges he faces as a visually impaired man.

“In New York City, a cab driver would not let me board because of Oslo, my guide dog,” he explains. “I have also been denied service at restaurants and coffee shops in several major cities because they wouldn’t let him in.”

Belo Cipriani’s BLIND is available at all major booksellers. His first novella, Mid-day Dreams, a short tale about a Portuguese family who discovers one of the uncles is gay, releases October 7th 2014. For more information on Belo Cipriani, visit http://belocipriani.com.