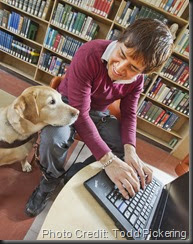 In the spring of 2007, Belo Cipriani, a young gay man living in San Francisco, was beaten and robbed of his sight at the hands of his gay friends. At the age of twenty-six, he was forced to relearn how to walk, cook, and date – in the dark. In his first book, Blind: A Memoir, Belo Cipriani chronicles the two years immediately following his assault.

JRK:  Can you give Diversity Rules readers an idea of who Belo Cipriini is — where you are from and all that good basic information?

BC:  My name is Belo Cipriani and I’m a gay and blind writer from the San Francisco Bay Area. I was born in Guatemala City to an Italian mother and a Brazilian father but was raised in San Jose, California. Currently, I’m the career blogger for the San Francisco Chronicle, a spokesperson for Guide Dogs for the Blind and the Writer-in-Residence at Holy Names University in Oakland, California.

JRK:  In 2007 you were beaten and robbed and were left blind as a result.  Can you tell us a bit about the incident and what precipitated it?

BC:  On a chilly evening in San Francisco, I came across a group of old friends. My hellos were replied with angry insults and they began to beat me. I don’t think they intended to blind me; however, I can tell they were in raged and that they took their frustrations out on me.

JRK:  You wrote a book called “Blind:  A Memoir” that chronicles the two years after you lost your sight.  Can you tell us about the book and what your life has been like during these two years?

BC:  I would be lying if I said the two years after the assault were easy. I had to learn how to do everything the blind way and I spent a great majority of those two years in different training facilities. Walking with a cane, then a guide dog, learning braille and to cook was how I spent most of those two long years.

JRK:  What is the prognosis for your vision?  Is there a chance it will ever return?

BC:  There is currently no medical treatment available for the type of retina trauma I have. But even if there were to be some magical cure in a few years, I would not go for it. I have accepted my condition and feel happy as a blind man.

JRK:  You have stated that “disability does not mean the end of someone’s life.”  How do we as a society dispel the misconception that having a disability means that a person cannot carry on about their lives with some degree of normality?

BC:  People with disabilities are plagued by stereotypes and one of the ways to help clear some of those stereotypes is to demand more diversity in popular media. The disabled are the largest minority group, yet we’re rarely seen on TV shows, commercials and magazines. If the disabled were more common, they would be treated with more normality by the general public. It’s bizarre that the disabled are not part of major ad campaigns considering we eat, wear, and drink the same things everyone else does.

JRK:  You have stated that the gay community has been slow to embrace individuals with a disability.  Can you expand on that and tell us why you feel this way?

BC:  There are very few representations of people with disabilities in mainstream media and even fewer in LGBT mass media. Popular gay and lesbian characters are often portrayed as abled bodied but also disability seems to be missing altogether from their worlds. I was once turned away from a speed dating night at a gay bar because the bartender said they didn’t have any blind guys for me to date. More than half the time I have been asked to leave a place, whether it was my guide dog or my inability to see that confused the staff, has happened at gay venues. People learn a lot from television, magazines and ads. I think that if there were more examples on disability etiquette on gay media, I would be bettter treated by my community.

JRK:  You have been named the spokesperson for Guide Dogs for the Blind.  How can we support this great organization in light of it not receiving any government funding?

BC:  People can donate at guidedogs.com but also be involved in many other ways. While not everyone has the time to raise a guide dog people can help the organizations by offering their businesses as a training facility. This is especially important for owners of restaurants and venues with a lot of traffic. Puppy raisers need to introduce the future guide dog to as many environments as possible and having a list of places that are open to having dogs in training stop by would be very helpful. Lastly, people can get their employers to sponsor a guide dog team. A team is a person and their guide dog and can help pay for vet care or medications.

JRK:  Many in our society remain blind to the challenges faced by the visually impaired.  Can you tell us how this lack of understanding has impacted you?  What can we do to educate people on what it means to be blind?

BC:  The lack of understanding by the general public has caused a high unemployment rate among working-aged blind people. According to the National Federation of the Blind, 70 percent of blind people are unemployed and on some type of government assistance. Of the 30 percent who are employed, 20 percent work for organizations that serve the blind community — so only ten percent of working-age blind people work in mainstream businesses. For me, every time I have looked for a job, I had to show people how I work. I bring my laptop and demonstrate my screen reader technology—all to prove that I can do the job. Abled-bodied people can list their skills on their resumes and people accept them as fact. However, for many people with disabilities, no one is sure what we can or cannot do.

JRK:  You have said that you are “happy as you are.”  What do you have to say to those that are not happy as they are, and not necessarily those with a disability?

BC:  Unhappiness can be caused by many things. However, in many cases, it’s caused by the inability to do things we desire. So, maybe someone has to do a job they are not crazy about to bring home the bacon. Still, that doesn’t mean other aspects of their lives have to be grim too. Perhaps you don’t have the career you dreamed of or don’t like your living situation, whatever it may be, find ways to unplug and bring pleasures into your life, one small item at a time.

BC:  October is national disabilities awareness month and I invite all your readers to learn about a disability. Find out how many types of wheelchairs there are or how dogs help people with a hearing impairment. Learning a group’s history will help fight future misconceptions and can be a lot of fun.