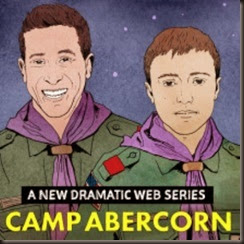 Every summer hundreds of thousands of Scouts head off to summer camp at hundreds of places just like Camp Abercorn.

Camp Abercorn is a dramatic web series about the blunders and the victories—an authentic portrayal of life on camp staff. For ten weeks each summer Camp Abercorn becomes a bustling wonderland of activity for boys, guided by their fearless leaders – the camp staff.

With the BSA’s recent change in membership policy, youth members are no longer excluded based on sexual orientation, but parents and adult volunteers are still discriminated against. This chasm has created a question that needs to be answered.

What happens when a gay Scout turns eighteen? Viewers can help answer this question, and maybe even change the future.

While this is a big inspiration for the show, it’s not the only story being told, not by a long shot.

The series documents authentic stories inspired by real experiences that people can relate to; some that will bring light to important issues; and some that are just plain fun.

In telling the story of Camp Abercorn the producers hope to lend support to what America needs now more than ever; the awesome potential of Scouting for shaping boys into the men who will lead us into the future; men who treat everyone equally regardless of their gender or sexual preference.

The first season is planned to be seven, half hour episodes. It’ll look and feel just like a show you’d watch on TV, but it will be made independently. The producers believe a web series can be high-quality, artistic, powerful work.

Shows with a similar aesthetic include Friday Night Lights or a PG version of Skins. In a world where dark violent dramas like Breaking Bad and Game of Thrones are the most popular shows, it might seem crazy to make an innocent camp show, but what the show lacks in blood and cursing, is made up for with heart.

The current plan is to release the show on YouTube free for everyone. Another possibility is possibly to end up on a paid service (like Netflix or Hulu).