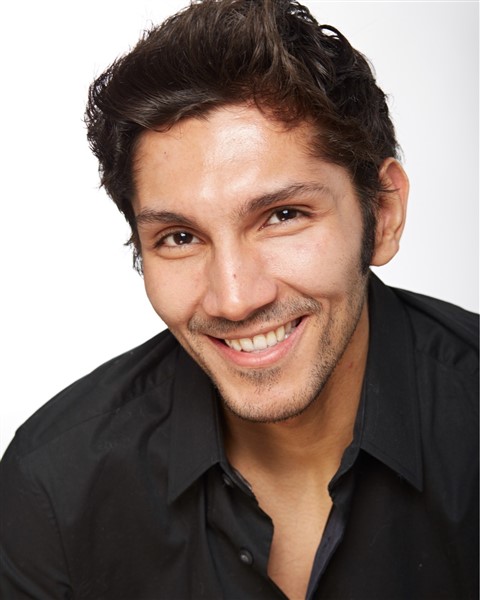 Glauco Araujo is a Brazilian-born professional dancer and actor trained both here in the U.S. and in Brazil. In Rio, Glauco danced with the Rio Dance Company (modern dance), as well as with the integrated dance company ANDEF (disability dance). In 2012 Glauco represented Brazil in the closing ceremony of the Paralympic Games in London. And from 2015 to 2017 Glauco acted and danced lead roles at Momenta Dance Company with a repertoire including Doris Humphrey, Martha Graham, and Charles Weidman, as well as classic choreographers like August Bournonville, Mikhail Fokine, Jules Perrot, and Marius Petipa; and disability choreographers Alice Sheppard and Ginger Lane. At Momenta, a dance piece entitled Meloudious Marco was created for Glauco in which he was featured in the lead role of Marco.

Glauco was drawn to NYC in early 2017 and was given a scholarship in ballet at Alvin Ailey from 2017 to 2018. In 2018 he was the featured dancer in ”Aria,” a duet choreographed for him by Pedro Ruiz, with live accompaniment by the Camerata NY Orchestra. Glauco danced and acted the following year in Sasha Spielvogel’s new musical Come Back Once More So I Can Say Goodbye — a celebration of the 50th anniversary of Stonewall. Glauco’s next featured role was in Joshua Bergasse’s musical A Crossing, performed with Barrington Stage Company.

On TV Glauco most notably had a featured comic role in a promo commercial for Betty in New York, and last January Glauco played the devious Pawnbroker on “The Investigation Discovery Channel” in Homicide City: Charlotte.

Drawn to the New York theater scene, Glauco has worked nonstop onstage for the past two years, working often with Triangle Theater and The Snarks, ACC and EAG. His New York debut was as the romantic lead, Peter Latham, in Pierre Barillet’s Forty Carats. His comic turn was followed by his hilarious performance as the effete Bob Lamb in Tina Howe’s Museum. In a series of scene nights, Glauco’s range has covered the hot-headed role of Ken in John Logan’s Red, the sweet-hearted Cornelius in Thornton Wilder’s The Matchmaker, the deceptive Morris Townsend in Ruth and Augustus Goetz’s The Heiress, and the diabolic Adolf Eichmann in Raul Wallenberg’s Saved Me. And, with the playwright, Carlos Sepúlveda, Glauco performed in “Soledad Bailada Y Casi Compartida,” presented at the University of Seville, and on tour around Spain.

Glauco has been thrilled to work alongside Broadway and West End actors Anthony Newfield, Alison Fraser, and Karen Archer in Richard Alleman’s new play Adrift, playing the Brazilian, and provocative Zumba instructor, Flavio. Glauco has been honored to be part of special performances to benefit the Episcopal Actors’ Guild and the Cape May Stage.

Reviewed in the Times Square Chronicles, “Betsy (Alison Fraser) longs for something more, alongside interactions of the less virtuous kind with the handsome and sweet-talking Flavio, played seductively by the appealing Glauco Araujo (Spielvogel’s Come Back Once More).”

Recently, Glauco performed in a short bio-pic entitled Dance for Freedom, highlighting the challenges people of color face today, and which has garnered recognition as the First-Place Recipient of the Dr. David Milch Foundation/CCNY Award in a short film competition. In her review juror Timberkly Whitfield, program executive, and producer for A&E, as well as a host on the History Channel and A&E, wrote: “Glauco Araujo is a beautiful dancer and you capture him in such a way that really moved me. I felt inspired by his story that even in the face of racism he doesn’t see himself as a victim. Strong production values. You checked all the boxes on this one — FANTASTIC!”

Find out more about Glauco Araujo at his website!