Her most recent book, An American Queer, a collection of “The Amazon Trail” columns, was presented with the 2015 Golden Crown Literary Society Award in Anthology/Collection Creative Non Fiction. This, and her award-winning fiction, including The Raid, The Swashbuckler, and Beggar of Love, can be found at www.boldstrokesbooks.com/Author-Lee-Lynch.html.

The threat of atomic war overshadowed my generation. On May 8, 1945, Winston Churchill announced VE Day, the end of World War II in Europe. On September 2, 1945, after horrendous destruction, Japan formally surrendered, ending the war throughout the rest of the world. I was born September 9, 1945 into a world free of war and ready for freedom and prosperity.

Yet the New York City school system issued “dog tags” to every student so we could be identified in case the devastation we wreaked on Japan came back to bite the U.S.A.. This possibility was very real to us as we cowered under our desks or in hallways during bombing drills. We knew to instantly act when told to “Take cover,” much as the British knew to go to the Underground when German planes invaded.

We Victory babies (in between the Great Generation and the Baby Boomers) were unanticipated casualties of August 6 and 9, 1945, when the United States attacked Hiroshima and Nagasaki with a decimating new weapon. While our parents celebrated, many of us grew up certain only of our vulnerability. Russia became our big bugaboo and we were taught paranoia along with our ABCs.

It’s no surprise that so many us born into an ostensibly free world have spent our lives enduring anxiety, depression and other mental health byproducts of post war childhoods. I was in the U.S.—what did those bombs do to kids who lived through bombardments and with maimed or widowed parents? Exploding atom bombs. The images burned into American and European brains. Burned onto Asian flesh. Black and white newsreels of bombers dropping their payloads were proudly projected in American theaters and later, piped into our homes on TVs.

As the Victory babies grew, our battered parents prospered in the 1950s, but lived with nightmares of breadlines and rationing, combat and the separation of families. My father returned from West Africa and Europe with recurrent bouts of malaria. My mother and brother moved in with her parents, people who never did recover from the Depression.

By the time the babies of the Great Generation were in high school those of us not mired in poverty jumped either of two ways. Some thought eradicating Communists would give us the safety we’d been promised. Others decided stopping all war was possible. As a result, today we have underserved veterans missing limbs, paralyzed and/or disabled from exposure to, among other poisons, Agent Orange. And we have retired civilians exhausted, but still fighting the good fight against fighting.

The victorious parents were introduced to little white pills called tranquilizers or indulged in serious cocktail hours, or both. Now, little white pills are out of favor with the medical profession, although alcohol, and increasingly, marijuana, remain acceptable buffers to the disappointments of our high ideals. Therapy, OMG therapy—behavioral, cognitive, group, gestalt, alcohol and drug, family—has provided both succor and/or employment for countless of our troubled ilk. My sweetheart’s generation was encouraged to stay healthy with “Pop a Chocks!” multivitamin pills. More modern scientists try to quell our inescapable fears with a new class of pills called SSRIs (selective serotonin reuptake inhibitors), SNRIs (Serotonin norepinephrine reuptake inhibitors), Tricyclic antidepressants, and other gobbledygook-named magic potions.

None of the above resolve a thing, of course. They only make bearable terror of annihilation. They only 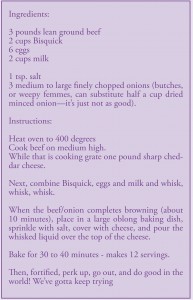 make functional so many who are hindered by chronic gloom and unremitting apprehension. President Obama has led the U.S. away from the concept of all out war, much to the chagrin of the industries that feed off mass combat. Now we send out drones and Special Forces to accomplish with better accuracy what atom bombs failed to do.

We’re not fighting for peace any more, we’re fighting for security. Bottom line: we’re still fighting. Therapy and pills may help us cope, but neither end war nor bring victory. With help, we settle for security.

Or as much security as is available on this belligerent planet. Food is certainly a part of security. With that in mind, I offer my Sweetheart’s recipe for Cheeseburger Pie as a substitute for big pharma balms and military battles.

Then, fortified, perk up, go out, and do good in the world! We’ve gotta keep trying.