Life in the Adult Playground of Chicago’s Boystown
Created by Jake Biondi
www.jakebiondi.com 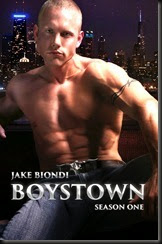 One of the most diverse and lively neighborhoods in the country, Chicago’s BOYSTOWN has something for everyone. So it’s no wonder that Jesse Morgan and Cole O’Brien chose to live there upon graduating from college.

Ready to  begin the next phase of their lives in an exciting new city, Jesse and Cole quickly find themselves at the center of a new group of friends. Joyelle and Derek Mancini have been happily married for years, but Derek is harboring a secret that could tear them apart. Derek’s brother Emmett is about to discover that his boyfriend Keith Colgan has a past that will haunt them both. Long time couple Logan Pryce and Max Taylor must face a crisis that neither of them expected.

And, before they realize it, Jesse and Cole find themselves at the center of it all in the adult playground known as BOYSTOWN.

Growing up in the suburbs of Chicago, Jake Biondi fell in love with “The Windy City” at an early age.  He left the Chicago area for four years to attend the University of Notre Dame, from which he graduated with degrees in English and Business.  He was awarded the university’s prestigious William Mitchell Award for Playwriting.  Upon graduating from Notre Dame, Biondi returned to Chicago where he attended and graduated from the Loyola University Chicago School of Law.   He has been living in Chicago’s Boystown neighborhood for over 20 years.

While studying literature, Biondi became a huge fan of Charles Dickens whose novels were originally released in installments, each ending in a cliffhanger to keep readers coming back for more.  Because of his love of those novels as well as television dramas such as Dynasty, Knots Landing, Dallas, and Revenge, Jake Biondi decided to create a serialized saga for contemporary audiences.  Thus, BOYSTOWN was born.

Biondi began BOYSTOWN in June of 2013 as an online story and intended to release one “episode” online per month, each ending in a cliffhanger. The story became so popular — and the online reading audience grew so quickly — that people from all over the country began to email him demanding to know what happened to their favorite characters and wanting the episodes to be released faster.  They also had suggestions for future storylines! Biondi was surprised and excited by the readers’ response to BOYSTOWN and began to write and release installments more quickly.  By November, Biondi had released 10 episodes and his reading audience had expanded well beyond the borders of America.

Because of BOYSTOWN’s huge success online and the serialized nature of Biondi’s writing, readers from all over the globe have been able to correspond with Biondi and influence the storylines of the BOYSTOWN saga as Biondi writes it.

Readers also suggested that Biondi publish the first 10 episodes as a book rather than leaving them online.

He took their advice — and “BOYSTOWN Season One” was published in late November of 2013.

The book is selling very well locally and nationally. In the meantime, Biondi continued to write additional 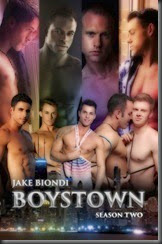 Because of the popularity of the book, people have suggested that BOYSTOWN be turned into a television series.  Biondi has begun to reach out to television networks and producers — and their response has been very positive.  Working with actors and other professionals in the entertainment industry, Biondi hopes to bring BOYSTOWN to television in the near future.

“Living in Boystown, as I do, it’s hard to capture the spirit of this bustling neighborhood. But this book manages to do that. The cast of colorful characters drew me in and wouldn’t let me go.

I devoured this book and couldn’t wait to turn the page and see what was going to happen. Part romance, part mystery, part biography of my neighborhood, I wanted to take the day off of work just to finish.

The only downside was finishing and knowing I would have to wait to see what would happen until the next ‘season.’”