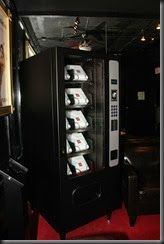 The vending machines will feature OraSure Technologies’ OraQuick® In-Home HIV Test, the FDA-approved oral fluid rapid OTC HIV test that can detect antibodies to both HIV-1 and HIV-2 with an oral swab in as little as 20 minutes.  To access the complimentary testing kits, users will anonymously answer five demographic questions via an accompanying iPad kiosk and receive an access code to enter into the vending machine; users may receive up to two testing kits with each code.   Each kit will include information on HIV testing and care providers, along with AHF’s 24-hour care hotline (213) 304-8151.

“AHF is excited to extend the reach of modern technology by placing at-home HIV testing kits in electronic vending machines. This innovative partnership with FLEX Spas promotes convenient HIV testing twenty-four hours a day, including after hours when healthcare workers are not testing on site,” said Lori Mizuno, Director of Public Health for AHF. “With the ease of buying a pack of gum, high-risk populations can now access free, in-home HIV testing kits from a vending machine and learn their status within minutes.”

“The new HIV self-test kit vending machines available at sex clubs in Los Angeles are a true breakthrough in access to HIV testing,” said by Jeffrey D. Klausner, MD, MPH Professor of Medicine and Health in the Division of Infectious Diseases at the David Geffen School of Medicine at UCLA. “It represents the successful partnership among UCLA researchers, community-based organizations and businesses dedicated to the health of their clients.  I applaud its introduction.”

During the 1980s AIDS crisis, many American all-male bathhouses, especially those in San Francisco, shut down or were forcibly closed in an effort to control the epidemic by eliminating what has long been viewed as an opportunity for illicit and often high-risk sex and drug use. In Los Angeles, however, bathhouses remained open but with new regulations: in order to operate legally, the venues had to provide testing for HIV and patrons were supposed to use condoms during all sexual encounters. However, a 2003 study by the Los Angeles County Health Department still found that more than 10% of men surveyed had engaged in unprotected sex in the bathhouses.

“FLEX Spas is excited to partner with the AIDS Healthcare Foundation on this groundbreaking effort,” stated Todd J. Saporito, President/CEO of FLEX Spas. “We believe that FLEX Spas has a unique opportunity to reach consumers, influencing health awareness and linkage to care. AHF’s strategy on delivering health services and care perfectly aligns with the overall business model of FLEX Spas.”

The Foundation has already begun providing free condoms to the spa locations in Los Angeles, Phoenix, Atlanta, and Cleveland.

About AHF:  AIDS Healthcare Foundation (AHF) is the largest non-profit HIV/AIDS healthcare provider in the USA. AHF currently provides medical care and/or services to over 350,000 individuals in 36 countries worldwide in the US, Africa, Latin America/Caribbean, Eastern Europe, and Asia. For more information, visit www.aidshealth.org, find us on Facebook: www.facebook.com/aidshealth and follow us on Twitter: @AIDSHealthcare