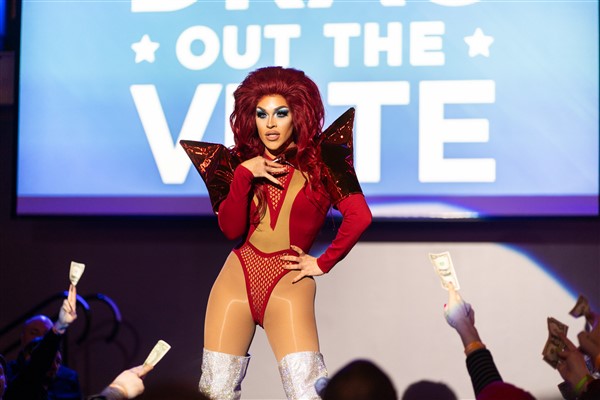 This month’s issue features two innovative and creative campaigns to encourage people to vote — Flex Your Vote, and Drag Out the Vote. “Flex Your Vote” was the brainchild of Mike Ruiz. He has brought together eight of America’s leading fitness photographers to join forces on “Flex Your Vote,” a new campaign that aims to encourage the LGBTQ community and its allies to the polls this November. The main focus of the campaign is on the 1 in 5 LGBTQ persons who are not registered to vote. With thousands of shares and reposts, they are hoping to motivate the 20% of the LGBTQ community that isn’t registered to vote to do so.

“Drag Out the Vote™” is a nonpartisan, nonprofit organization that works with drag performers to promote participation in democracy. They educate and register voters at drag events online and offline, by organizing local and national voter activations. Led by fierce drag kings and queens across the nation, they advocate for increased voter access and engagement in 2020 and beyond.

As is the case with the “Flex Your Vote” campaign, “Drag Out the Vote” seeks to engage the one in five LGBTQ people who are not registered to vote, and election cycle after election cycle, youth turnout continues to be a challenge. The power of these two groups, specifically, is one that has the potential to change the future of our country for trans rights, queer workplace protections, access to lifesaving HIV/AIDS prevention and treatment, and gender-affirming healthcare, and more.

If you are not registered to vote, Diversity Rules Magazine IMPLORES YOU TO DO SO. Our nation, and its escape from the fascist pig called Trump, is counting on you. Your vote counts. Every vote counts. Do not waver or hesitate in registering to vote. We can change the direction of our nation if you all just VOTE!

More information about Flex Your Vote can be found HERE.

More information about Drag Out the Vote can be found HERE.