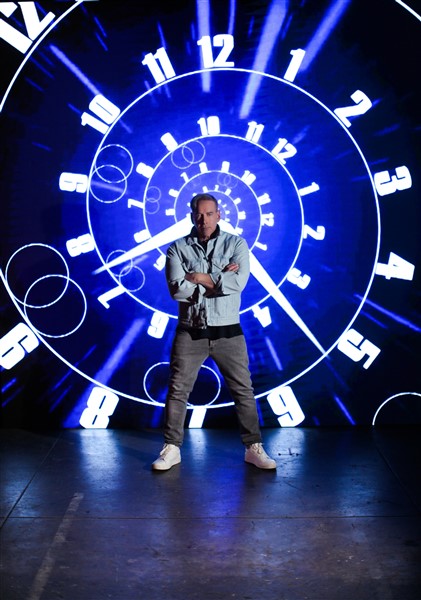 Michael Fairman grew up in Milwaukee, Wisconsin. Music was always his passion and first love. As a teen, he released his first recordings through a small label in Chicago. Once he graduated high school, he moved to Los Angeles and then to New York to pursue his career as a recording artist. He formed a band to back him. They performed in clubs, recorded, and tried to get the A&R reps from the record labels to come out to his showcases, but due to a myriad of excuses, they seldom came. The rejection and the financial drain eventually convinced Fairman he needed a major change. He put music on hold and moved back to Los Angeles where he began a career in TV Production and entertainment journalism.

JRK: Before we get into the interview, can you give readers some background on Michael Fairman? Where you are from, and all that good introductory stuff!

MF: I’m from Milwaukee, Wisconsin, and spent most of my adult life in either Los Angeles or New York City. I originally pursued a career in the recording industry as a singer/songwriter and then wound up with a successful career in TV production and then as a journalist and host. Now, I am going back to whence I started. I currently reside in LA.

JRK: You released a new single called “Better Late Than Never.” Can you tell us what the song is about?

MF: The song is about not letting the clock and/or “father time” beat you, but that you beat it. And that it’s never too late – whether it be in a relationship gone awry that you desperately want back – or to make that big, bold, move in your life to go after your dreams, whatever they may be, without fear of failure.

JRK: Originally, you were going to call the song “Hail Mary.” What was the reasoning, and why did you change it?

MF: I am a huge sports fan and I was thinking about the concept of this song – that the perfect analogy is that heart-stopping moment in a football game, where your team is pushed back all the way to the other team’s end zone, and the quarterback has but mere seconds left on the clock. He has to throw the football down the field over 90-some yards in hopes that his receiver catches it and can win the game. It’s that desperation, that right or wrong move, those split-second decisions and moments in our lives that can shape them forever. Because that type of pass is called a “Hail Mary”, I thought, “There it is! My song title! How cool!” The problem was “Hail Mary” sang kind of clunky against the groove I had for the track, and I didn’t want to change that. So, unfortunately, I had to scrap it, and in turn “Better Late Than Never” was born and became the eventual title and theme.

JRK: The press release for “Better Late Than Never” says it builds on your prior three releases, “Thing About Me,” “Can’t Let You Go,” and “Other Side.” How so?

MF: If you go to my Spotify Artist account, “Michael Fairman” I would urge everyone to take a listen to all four tracks back-to-back. Each of these songs has some very dark undertones to it, in terms of what they are about … and I am a huge lover of minor chords in my music, not major pop chords, but yet structuring it so by the end of each of these songs there is hope, “a way-out of the dark” sort of speak, and optimism. All of my tracks have a few staples: big anthemic choruses, lots of harmonies, and a message that I hope resonates with each listener in how they choose to interpret the song. I feel like all of these could be contained in one album and you would hear their throughline.

JRK: Given the struggles related to the Covid pandemic, you still produced the single. How did you get it done given all the restrictions that kept recording studios closed?

MF: It was a HUGE challenge, for sure. As a recording artist and a musician, the Covid-19 pandemic left all of us unsure of when can we gig again? How are we going to record to remain relevant when we’re not allowed to go inside recording studios? How would we shoot a music video to promote a new song when you could not have more than 1 or 2 people in your crew and locations were limited? It all took some very creative thinking and planning. For me, it took me months to get the SM7B microphone to record from home because they were flying off the shelves during the pandemic as so many people were using them for podcasts that spouted up and singers were using them to record. Once, I finally had one secured, I was able to work with my engineer and co-producer, Kyle Mangels, remotely via Zoom, and track the vocals with Logic using an interface and more digital tools. It was an experience I will never forget, but out of all it. I gained significant knowledge of other ways to record than just the standard way in a studio. And btw … kudos to Taylor Swift for putting us all to shame by dropping not one, but two albums in one year during a pandemic.

JRK: Why do you think studios, publishers, etc., are so resistant to providing older musicians, and other creative types a chance to get their creative pursuits out there to the public?

MF: First, we live in an ageist society. There is a belief that whether it be in applying for a job, or whether it be putting out music, that the newer, shiny, younger model is always better and a “safer” way to go. Combine that with how social media and influencers are skewed to the younger demo and they have millions of followers, that therein lies the potential dollars and revenue streams for a label. I truly believe that like “The Voice”, when the contestants first sing and the judges can’t see them, what does it matter how old they are or what they look like? If they have a great voice, a great song, and a production that sounds in line with what’s popular in music, or on pop radio today, why should this ultimately matter? We as a collective should embrace the uniqueness of older performers who can deliver; instead of shunning them. The way things stand now if you’re over 25 you may lose the support from your label anyway as they deem that “old”. Sad, but sometimes very true. I also want to say that I am in awe of many of the younger musical artists of today who I think are so deserving of their success and inspire me from Shawn Mendes, Harry Styles, Dua Lipa, H.E.R., etc., my list goes on!

JFK: What advice can you give to other “mid-lifers” struggling to have their voices heard?

MF: Stand up and be heard. Do not let people tell you that your voice does not matter. I would say though, in order to do that, people at mid-life also need to do their work to keep abreast of what’s new out there, how things are evolving, what is the current landscape in pop culture, our culture, etc. If you are young in mind and in spirit, I believe you don’t have to let age define you and take a back seat to anyone. Don’t be afraid to take that first step on the road to what you have always wanted to do.

Nothing is worse than feeling trapped in mid-life. The change has to start with your attempt to open up new opportunities for yourself, while everyone else is telling you the door is shut. Sometimes you just have to block out the noise and walk through the fire.

JRK: What is next for Michael Fairman?

MF: At this point, I’ve kind of gone too far to turn back now. After releasing several tracks and putting myself back out there an as artist, I am writing and recording new songs, and looking to start playing live with several performances, pending what happens with this next wave of the Covid-19 pandemic that is currently spreading through our country.

JRK: Do you have any closing thoughts you would like to add that is not already covered above?

MF: I just to thank you for this chat, and that I would love it if everyone would stream or download “Better Late Than Never” on Spotify, Apple Music, or your favorite major music streaming platform, check out my music videos and more on the Michael Fairman Channel on YouTube, and stay connected with me on my different social accounts on Instagram, Twitter, Facebook and very shortly, TikTok.