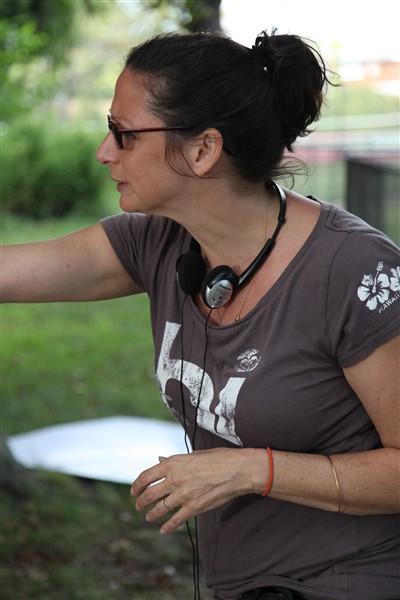 Suzanne Guacci is a former New York State Trooper who lost her leg in the line of duty in 2001 and went on to become an award-winning writer/director, and producer. Suzanne created Aspire Productions in 2007 to tell authentic character-driven films about the LGBTQ and disabled communities. Her films have screened at festivals all over the world including Framline, Outfest, and BFI. Currently, Aspire Films can be seen on various platforms including Amazon Prime, cable, VOD, and broadcast television worldwide.

In 2018 Suzanne was the recipient of the distinguished Ravenel Feature Film Grant for her feature film, T11 Incomplete. T11 Incomplete is currently on the festival circuit and will be having its US premiere at Outfest.

Suzanne is a proud member of NYWIFT. She holds a BA in English Literature and a Master’s Degree in Public Administration.

JRK: Before we get into the interview, can you tell readers a bit about Suzanne Guacci?

SG: I was NY State Trooper and I lost my leg in the line of duty many years ago and so that most certainly was my own “T11” My world changed dramatically when I lost my leg. And now, as a writer and director, I do feel a great responsibility in my work, to bring forth stories about disability.

JRK: You are the director of T11 Incomplete. Can you tell us about that project and what the film is about?

SG: T11 Incomplete is a story with a disability at its center. The term “T11 Incomplete” refers to the point of severing on the spine that causes paraplegia, but being an “incomplete” paraplegic means that the patient still has some feeling, they are not completely numb.

In our story T11 Incomplete, each character has their own literal or metaphorical “T11.” A point in their life where an injury or severing occurred that altered and changed the direction of their lives forever and yet, each character still can feel. No one is completely numb. This is a parallel theme for each character in our story and the question ultimately becomes, who is the more broken of the bunch? The body that’s broken or the spirit that’s broken?

JRK: Can you enlighten readers more about what the “incomplete” part of the movie’s title means?

SG: An “incomplete” paraplegic still has some feeling, they are not completely numb. And it is perhaps the only circumstance in life when one is labeled “incomplete” that it is a positive thing.

That was the starting point in writing this story because we, collectively as human beings, are all “incomplete.” Through the battles of life, we all have had our “T11” either metaphorically or severed; be it by failure, illness, addiction, divorce, death, abandonment, or like Laura in the film, a literal severing of the spine. Each of us has had a “severing” that has stopped us dead in our tracks, damaging and changing us forever.

And yet as human beings, it is the essence of our spirit that allows us to hope. To open our eyes and rise; to work through our pain so that we may feel again, love, and carry on another day. We are not numb. Yes, we are all “incomplete” but in the very best possible way.

JRK: Can you provide us with a brief synopsis of T11 Incomplete?

SG: The movie is about Kate Murphy (Karen Sillas) who lost everything when she hit rock bottom. Now, ten years sober, middle-aged, and living alone with her elderly cat, Kate strives to rebuild her broken life and repair her damaged relationship with her son Jack (Zachary Booth). Barely making ends meet as a visiting home health aide, Kate marches quietly through her uneventful days, until she is assigned a young, beautiful, paraplegic patient named Laura (Kristen Renton). Bonded by their mutual suffering, the two women share an undeniable connection and it isn’t long before they fall deeply in love. But when Kate steals money to save her dying cat, she betrays Laura’s trust and finds her fragile world shattered once again.

JRK: Can you talk about the casting for the film and how you selected folks to be part of the project?

SG: For this film, T11 Incomplete, we made a conscious effort to cast actors with apparent and non-apparent disabilities in front of the camera and behind the camera. We wanted collectively for this film to have disability run through the fabric of the entire production not just in the story itself. So we cast an actress with Lupus and another actress with MS. We cast an actress who is a double amputee and two of our producers have a disability. We even chose a blind kitten! We have made a continuous effort to stay true to the story we are telling in every possible way which includes casting actors who identify as part of our LGBTQ community as well. Not an easy task to be inclusive to the many communities our film represents but it is our responsibility to try. My theory has always been, “if not me – a disabled, lesbian writer/director, then who? “ It must start with me and by being inclusive, we are opening up the scope of this film to several
communities who seek honest representation.

JRK: The styling of the film is a bit different than most. Can you talk about that?

SG: Aesthetically, for the look of the film, we have made some bold choices that support the story in incredible ways. We begin our film in 16X9 aspect ratio with Kate on the beach, present-day, looking out into the vast water full of possibility. Then we switch over to the 4X3 aspect ratio for the majority of the film. This smaller framing not only enhances the lonely, limited, and claustrophobic feel of Kate’s world but it suggests that the story we are telling is perhaps from Kate’s memory.

Additionally, everything in Kate’s “world” is shot handheld with low, natural light, to emphasize her world that is colorless and empty; dark, gritty, and raw. In Laura’s world, we have fluid movement mostly on dolly’s; we have color and light. Additionally, we are shooting on vintage Super Baltar lenses which are giving us an “old”, familiar feel and softness that supports this very different love story.

JRK: When will T11 Incomplete be released?

SG: T11 Incomplete will be released in the US & Canada (by Gravatas Ventures) and in the UK (by Bohemia Media) in Early-Mid April 2021.

JRK: You have made great strides in highlighting persons with disabilities in your films, and the struggles they endure. How can that be expanded in the film industry generally?

SG: I think telling more stories about the disabled community is a place to start and I do think there has been positive momentum now more than ever in that regard so that’s a great thing. But also utilizing our disabled actor community in varied roles opens up the conversation about disability and possibility.

JRK: Can you talk about some of your other projects done prior to “T11 Incomplete?”

SG: My last feature was STUFF and that was about a married lesbian couple with two daughters who are going through a rough patch in their 20-year marriage. They are trying to re-connect because they have lost touch with each other over the years of raising children, caring for elderly parents, career paths, etc. This can happen over time with any relationship, be it homosexual or heterosexual, and that is what I was examining with STUFF. And before STUFF I made a documentary called My Really Cool Legs! which follows a group of pediatric amputees from ages 7- 17, who challenge themselves beyond what is possible. These kids ski and dance and do trapeze and really meet life head-on and push themselves beyond their limits. Focusing on what they do have instead of what is missing.

JRK: In 2001 you lost your leg in the line of duty as a NY State Trooper. Can you talk about that a bit further, and the emotions you felt about what happened?

SG: It was a very sad, scary and complex time in my life. Being a NYS Trooper is a very physical career and to not be able to do that anymore was quite upsetting. I have always been a strong and athletic woman so to lose that career was a major blow. Not to mention how physically my body had changed when I looked in the mirror. Mentally it was a challenge to wrap my brain around what had happened to me and emotionally I had to kind of grieve the loss of who I was before I could fully embrace the new me. And that took years and lots of therapy and a supportive family and friends to help me get through it. But over time I began to pour everything into my work as a filmmaker and I feel so lucky and grateful to be here and to have a chance to add my perspective to the disability and LGBTQ conversation in film. It’s true that some days I dread putting on that prosthetic leg. It’s bulky and not very graceful but at the same time I am so thankful to God for it because it gives me my life back. I do everything I used to do. I just do it differently.