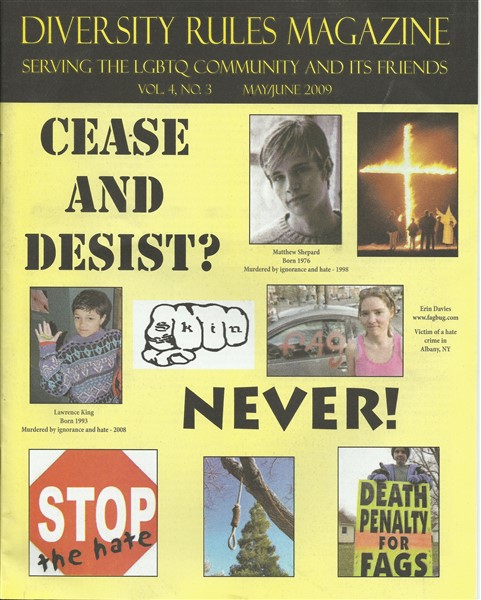 Diversity Rules Magazine was conceived in 2006 because there was no gay voice in the Central New York area at the time. I wanted to create a publication that offered some sort of reassurance to closeted gay, bi, and transgender individuals that there were others like them and that they did not have to feel alone and abandoned in a somewhat conservative part of upstate New York.

Since its inception in 2006, it has undergone many changes and iterations. It began as a bi-monthly publication serving what was known as the Central Leatherstocking Region of New York, now coined “Central New York.” It was initially distributed to locations within Broome, Chenango, Madison, Montgomery, Oneida, Otsego and Schoharie Counties, as well as Delaware County. Its original mission was to focus on issues of sexual identity, gender, race relations, diversity, and equality.

After about three years of doing Diversity Rules Magazine, I had my first direct encounter with a homophobic threat in 2009. Having never experienced it personally, it was always something that happened to someone else. When it actually happened to me, it was, needless to say, a bit unnerving since there was someone out there who had targeted me for who I was and what I was doing.

All but a memory now from 11 years ago but the whole episode still resides in my consciousness as vividly as when it first happened. I was told to cease and desist publishing, or else. A demand I clearly ignored. Unfortunately, we, in many ways, have not progressed too far, as these ignorant people still walk among us and are empowered by the repulsive man in the White House. We shall overcome. We shall get beyond his evil.

As I have done in the past periodically, I am once again reprinting the text of the quote as a stark reminder of what many of us still encounter on a day-to-day basis, despite the many advancements that we have achieved over the years.

Dear Mr. Koury, it has come to our attention that not only have you been spreading your heterophobic filth throughout the region but also include your faggoty shit where young children have access to it. They don’t know what even normal sex is in their impressionable minds. You will stop distributing in these areas and keep the shit in gay bars, etc. We have your name, associates, phone numbers, where you live and where you work, as well as your routines. You are giving an even worse impression of homos when you freely distribute among kids. It’s called recruiting, and you WILL stop if you know what’s good for you. You see Mr. Koury we are EVERYWHERE. We have infiltrated your queer organization AND distributorship. You boast of 10,000 issues a month. It’s really only 1/2 of that as OUR people destroy the rest. We are invisible and we are LEGION. We are 14-72 YEARS OF AGE. We are in your schools, law enforcement, churches and government (national and local) and we are EVERYWHERE. If you continue in your indiscriminate distribution of your filthy rag someone an “associate” perhaps will come up to you UNEXPECTEDLY to render you a personal TUNEUP!!!!! IF YOU ARE SMART YOU WILL TAKE HEED OF OUR MESSAGE. THE MAR/APR EDITION WILL BE THE LAST ONE THAT YOU DISTRIBUTE INDISCRIMINATELY MARK MY WORDS. ALSO IF YOU THINK “HATE CRIME” LEGISLATION WILL STOP OUR ACTIONS YOU’RE WRONG DEAD WRONG. In the present economy we can hire almost anyone to do WHATEVER needs to be done. Have a day. YOUR WORST NIGHTMARE