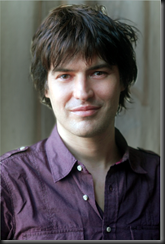 Actor/performer and writer MICHAEL CAVADIAS graduated from the Experimental Theatre Wing at the Tish School of the Arts where he studied with the likes of Andre Gregory and went on to perform with Mabou Mines E.T.C., Blacklips Performance Cult (founded by Antony of Antony and the Johnsons). He developed the character, Claywoman, at Blacklips and then with Mabou Mines as a part of their resident artist program. He has acted in many films, including Wonder Boys (alongside Michael Douglas and Robert Downey Jr.), Seeing You In Circles, and Gypsy 83. Television appearances include New York Undercover, Third Watch & others.  Michael fronted the rock band Bullet who’s songs were featured in the film The Safety of Objects and he is currently a featured performer with the acclaimed political cabaret The Citizens Band. He recently wrote and performed as Claywoman in The Mystery of Claywoman (Directed by Rob Roth) at Deitch Projects, The New Museum for Contemporary Art, The Wild Project and opened for Antony and the Johnsons at Town Hall.   He recently traveled to the UK to perform a new work (Conversations with Claywoman) at the Meltdown Festival, curated by Antony.   Upcoming projects include the short film “Junkie Doctors” directed by Rob Roth & written by MIchael Cavadias, & an appearance in the “Caveman” music video for “In the City” with Julia Stiles.  Michael will also be playing “Kelvyn” in the 1st episode of the next season of Girls on HBO.

Michael is also a DJ.  Michael plays a mix of rock, pop, 80’s, disco, funk, alternative & electro. Residencies include Marquee, Greenhouse, Juliet, Goldbar, the Ace Hotel, Lotus, Soho Grand The Garden of Ono, La Esquina, Hotel Chantelle and many other top venues. Recently, he was the DJ for Rufus Wainwright’s record release party at The Gramercy Park Hotel, Alan Cummings Halloween party at Soho Grand and Boy George’s birthday party in London. He has played parties for Estee Lauder, MTV, phillips de pury, PAPER magazine, & LifeBall in Vienna. In London he has been a guest at Caligula, Slave to Fashion, and The Dalston Superstore.

JRK:  Can you give Diversity Rules an idea of who Michael Cavadias is, a bit about your background and how it impacted the person you are today?

MC:  I grew up in Santa Cruz, CA and had the archetypal gay terror experience as a kid, taunting, disapproving father etc. but also mixed with lovely friends and some great experiences.  I think that having to deal with so much intense rejection at an early age slowed me down a bit but also hopefully instilled more empathy in me and an ability to identify with societies outsiders in general.

JRK:  You graduated from the Experimental Theatre Wing at the Tish School of the Arts.  Can you tell us a bit about the school and why is it called the “experimental theater wing?”

MC:  It’s a wonderful program with so many incredibly gifted teachers.  Honestly, I arrived in NY totally broken and confused and I think my experience at ETW fundamentally changed the trajectory of my life, broke me open and allowed me the space to begin a creative process.   Some of the things they taught us there took years for me to finally understand afterwards.

JRK:  The Claywoman is an awesomely interesting character!  What is the background for the character and how did she come about?

MC:  She came into my head one night in my room alone while I was at ETW.  I just started 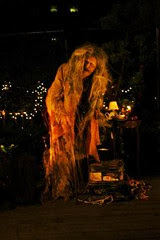 saying “Claywoman” and laughing.  Then I made a little piece at school based on her which I then performed at Blacklips which was the weekly theatre night organized by Antony at the Pyramid Club.  She is a 500 Million year old extra-terrestrial who visits Earth from time to time to give lectures at colleges or book readings.  The character was further developed when I worked with Rob Roth who directed “The Mystery of Claywoman”.  There is a mock documentary about the existence of Claywoman that I wrote and was beautifully directed by Rob.

JRK:  Your acting career is very diverse and encompasses many characters and you have played roles alongside the likes of Michael Douglas and Robert Downey, Jr.  What’s your favorite role you have played?

MC:  Oh that is difficult to say!  Antonia Sloviak in Wonder Boys is very special to me because it was the first real big film I was in and I made so many great friends.  Curtis Hanson is such a brilliant director and I learned a tremendous amount about film making during the process.

JRK:  I watched the video clip of the Bowie Ball from 2009.  You did an awesome job with it and Barb Morrison played some kick ass Sax in the vid too!  What was the Bowie Ball all about?

MC:  Bowie Ball is a yearly event organized by Deryck Todd.  I’m a crazy Bowie fan and Deryck has put together one of the best tribute nights in town so it’s just a blast to perform at it every year.

JRK:  You created a drag character called “Lily of the Valley.”  How did she come about and what did you learn from her?

MC:  Lily originally came from an improv I did about a woman who believed there were 32 angels talking to her that lived on her toes.  She eventually evolved into an umbrella character for all my drag performances in the 1990’s.   She was a spunky kind of punk, etherial girl who allowed me to live in that free space

JRK:  Tell us about your new role as Kelvyn in the HBO series “Girls.”  What’s the show about and how does your character fit into the show’s story?

MC:  The show is about the lives of four young women in NY and their trials and life experiences.  Kelvyn is a patient at the rehab that Jessa goes to in episode 1 of season 3.   It was an amazing experience working with Lena, Jemima & everyone else.

JRK:  What can we expect to see from you in the future?

There will be more visits from Claywoman and I’m working some new theatre projects with Eric Schmalenberger as well as getting a new short film off the ground.