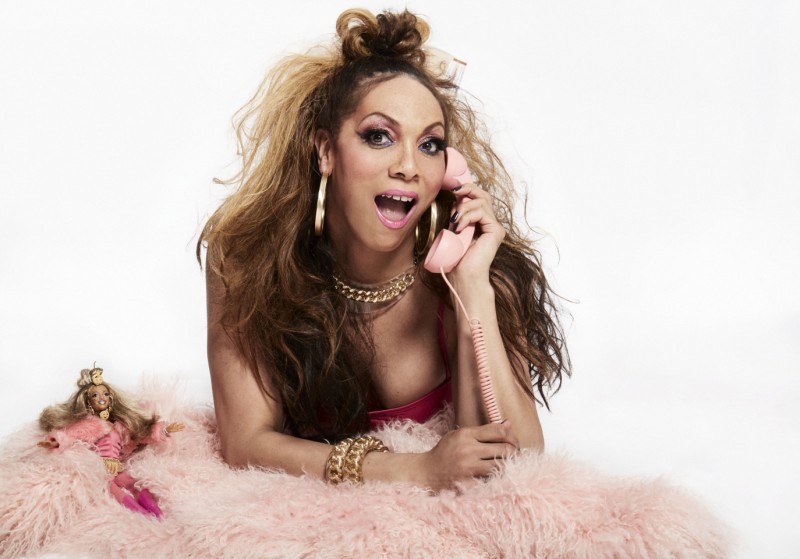 Lina Bradford grew up in New York City, across the street from famed Carnegie Hall on the Upper West Side. Her career in entertainment began at an early age as a dancer. She studied modern ballet, tap and jazz for 11 years and performed in several companies throughout New York. Those same moves she learned in rehearsals became a part of her signature style when she began her DJ career by performing throughout the gritty East Village scene. She travels through Europe, appearing in Sardinia, St Tropez and Paris. Accolades soon came rolling in, including DJ of the year and Lifetime Achievement awards at the Glammys and Sage Innovator. DJ Lina is often seen hosting the biggest private parties from NYC to Europe. Even with all her accomplishments, she feels as if she is just beginning to hit her stride. “I’ve never felt more sexy and solidified in my life,” she says. “This is by far the most beautiful spot I’ve been in.”

Lina Bradford is the spirited host of “In The Dollhouse With Lina,” a rollicking YouTube show. The show returns for its second season this month. In the show, Lina’s quick wit (known as “Linish”…yes, she has her own language) and infectious smile take center stage as she discusses music, fashion and pop culture with her celebrity friends.

JRK: Can you tell us a bit about your background, where you are from and all that good introductory “stuff?”

LB: Born and raised in Manhattan across from Carnegie Hall my grandmother was an opera singer , she showed me colorful diverse city and culture.

JRK: “In the Dollhouse with Lina” is a uniquely different talk show that focuses on topics that most would not chat about. How did you come up with the idea for the show?

LB: Thank you very much I have always had this riding beside me and knew that when the time was right it would present itself and I would do it and it did and here we are in our second season I feel very blessed and honored to be able to have the vision in my head to trade in real life with such an amazing crew and fabulous guest.

JRK: The show is done from your Barbie Doll room. How did you get into collecting Barbie Dolls and so many – over 600?

LB: I’ve been collecting since the age of four and the last that I counted was over 600 so I would have to recount in order to give you an accurate count.

JRK: The Magic 8 Ball is a great prop. I remember using it as a child and had so much fun with it. The show seems to bring folks back to a simpler, more childlike time. Have you embraced your “fun child” side all your life?

LB: I have it’s a wonderful tossed salad between my intellect and my goofy side I think that being a frosted Flake having equal side of both is the best way to ride through life especially in these times we could all use a little extra fluff with substance.

LB: Thank you so much I believe that I have a great rapport with anyone that I meet regardless if there a guest or not that is the wonderful testimony to me being a people person I generally love making people happy so they all add to the colorful backdrop that is the dollhouse.

JRK: You started your career in dance, and then left that for DJ’ing. How did that transition come about?

LB: I’ve always had this alarm clock that goes off in Me when I know it’s time to go to the next place in my life I always knew from the get-go that I was talented in many areas and just said I don’t need to pick one I’ll just do each of them when it speaks to me so after 20 years of DJ I knew that it was time for me to go to the next place and I took that moment let it speak to me and here we are,Shazam!

JRK: Tell us about the once-a-month residency Party TBS (Throwback Sundays) at NYC’s The Gilded Lily.

LB: Will always love the relationship I have with my audience when it comes time to music it is a gorgeous dance between us and I believe giving them once a month to look forward to it is a time for us all to come together and shake and shimmy and get our groove on. The most recent one was held on January 29th.

JRK: You have stated that you were brought up and influenced by a strong Aires woman. How did that influence impact you and how you perceive life?

LB: My spirituality has always been instilled in me from as long as I can remember and coming from strong Aries witches we have always been a beautiful covenant of love and light and energy.

JRK: The new political world we are now in is toxic to the LGBTQ community. Being transgender, what advice can you give to our queer and trans brothers and sisters for dealing with what could be a very denigrating time for many?

LB: I have always lived my life without labels except for the clothes that I wear, I embody my brothers and sisters of every walk and with that being said I believe we all need to stick together and stay strong and never sleep because at the end of the day we are the deciding factors of who gets up in the office and do the job we need to have done for our best interest to standing together and staying strong and being united is the only way we can get through these next four years.

JRK: Do you have any parting thoughts you’d like to leave with Diversity Rules readers?

LB: I’d like to thank you for interviewing me and showing love to The Doll House I’d also like to remind your audience that we are stronger in numbers and when we are united and just take time to look up out of our phones and talk to our brothers and sisters blessings love and light xoxo.

If you enjoyed reading this article and others, please consider subscribing, advertising or investing in Diversity Rules Magazine.