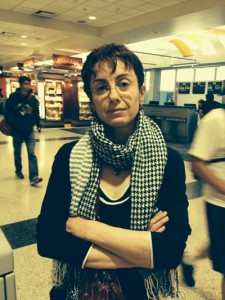 Julia Fox immigrated from Russia in her late teens, settling in the United States in the early 90s. She published two books of poetry before leaving her home country, both in Russian, and published two more in English language after immigrating. And Then There Were Three: Sixty Seven Letters to Sasha is her first autobiographical memoir.

As traditional Valentine’s Day-themed pink and red greeting cards replace the tired Christmas & New Year colours on the stands of stores, most of us are anticipating (or dreading) the invasion of our social networks and television with the typical romantic scenarios of exchanging gifts, kisses and love messages between two lovers of the opposite or the same sex. Very few of us ever imagine the holiday routine in relationships where there are more than two lovers involved. The images of cheating two-timers running between the deceived spouse and the scheming mistress aside, we are hardly bombarded nowadays by pictures of non-traditional family unions, such as polyamorous families, where the conventional Valentine’s day gift exchange is a little bit more complicated. 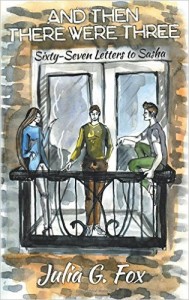 consent of everyone involved are estimated to have around 1.2 to 2.4 million followers in the United States alone. How do polyamorous relationships come about? I am sure it is rarely a case of waking up one morning with your partner snoring by your side and deciding ‘why not add to the duo.’ The stories of people entering into the polyamorous unions are as many and varied as those embarking on conventional ones.

The beginning of my polyamorous relationship was a case of almost choking on toast one morning after my husband of 10 years admitted to having a homosexual relationship back in his college years with a Ukrainian man named Sasha. Skipping through the finding Sasha story and straight into the reality of maintaining a household and a life with two partners and, yes, surviving a Valentine’s day together, the polyamorous relationship with a bi-sexual partner and a homosexual one who spent all of his life in the closet became an adventure for me worth sharing.

Almost all of us enter into a romantic union with the desire to be happy and to make our partners happy. Unfortunately, helping Sasha “come out of the closet” and leave the Ukraine was a huge struggle due to the severe psychological repercussions of concealing his sexuality since he was a young teen. Dreading being ostracized by the community, fearing shame, physical torture and even imprisonment, creating a heterosexual family and dissociating himself from gay community altogether made Sasha (and many thousands of his compatriots) the broken man that he was when he joined our family. Thus, welcoming Sasha into our union and expecting a ‘happy-ever-after’ was just as irrational as anticipating an unclouded happiness in any relationship once the wedding bells quiet down.

Each person comes into a relationship, whether it is a traditional one or less then so, with one’s own baggage of expectations based on childhood memories, literature, social media and a load of personal traumatic experiences and their consequences, and thus Sasha joined us with the full baggage of his own. Being forced into a traditional marriage by his parents and living his life as a heterosexual man affected Sasha’s mental health and contributed to the development of a whole range of mental issues, such as dissociation, depression, internalized homophobia, self-disgust, self-hatred and denial of one’s sexual orientation to oneself and others. There conditions are commonplace in persons with repressed sexual orientation, according to many prominent psychiatrists. Sasha exhibited all kinds of issues, such as low self-esteem, negative body image and contempt for the more open LGBT members who decided to come out years before. More importantly, Sasha had a tendency to deny that homophobia was a serious social problem altogether. Remaining in a heterosexual relationship for most of his life in an attempt to pass as ‘normal’ and to gain social approval, Sasha became chronically depressed and took to heavy drinking. His fear of intimacy and his suicidal thoughts presented a bigger challenge and a threat to our union.

My brief relationship with Sasha opened my eyes to the many aspects of homosexuality and the life paths that LGBT men and women choose in the parts of the world where homosexuality is still considered an abnormality.

The freedoms that sexual minorities are enjoying in the majority of democratic countries today are precious and unheard of in such places as Ukraine, Russia, Belorussia, Azerbaijan and other post-Soviet territories. Giving American LGBT members a glimpse into the lives of those who are less fortunate and still struggle for their rights might be an eye-opening experience this Valentine’s day.

Sasha’s arrival in our life, the life of a typical monogamous heterosexual couple, meant re-imagining our relationship, challenging traditional marriage, sexuality and love itself. All three of us had to learn to navigate and explore the challenges and complexities of a polyamorous reality together against a backdrop of cultural and societal expectations and judgments. Examining and questioning the dynamic and often challenging elements of marriage, relationships and acceptance, are just a few issues that polyamorous unions might bring out into the discussion.