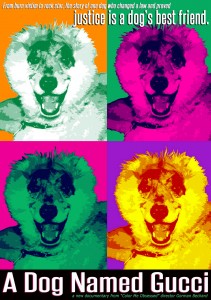 Director Gorman Bechard, whose documentary, “Color Me Obsessed, A Film About The Replacements,” was named one of “The Seven Best New Music Documentaries of the Year” by Rolling Stone, takes on a rock star of a different sort with “A Dog Named Gucci,” a feature-length documentary examining animal abuse laws in the United States.

The film will be released on DVD and digital platforms on April 19th, just days after the Record Store Day release of the film’s closing credits song One Voice. The film’s anthem song features Norah Jones, Aimee Mann, Susanna Hoffs, Lydia Loveless, Neko Case, Kathryn Calder, and Queen’s Brian May all lending their talents. One Voice will also be released on digital platforms. Profits from the sales of the song will go to support animal charities around the country.

“A Dog Named Gucci” is a timely and poignant documentary about a 10-week old puppy who was doused with lighter fluid and set on fire. Hearing the puppy’s cries, college professor Doug James ran to help. After chasing away the abusers, and at the request of Gucci’s young runaway owner, Doug took the puppy in as his own. Thus began a 16-year odyssey of love, devotion, and perseverance. Together with legislators, Doug and Gucci worked to create what became known as the “Gucci Bill,” changing Alabama law, and making domestic animal abuse a felony.

“Instead of assaulting the viewer with images of abused animals, we chose to tell what is ultimately a positive and uplifting story of one victim who went on to become a hero,” explains Bechard, who was recently named the recipient of this year’s Media Excellence Award from the ASPCA for his work on this film. “This is a triumphant tale. Gucci might begin his life as Blackfish, but he’s a fighter, and in the end he becomes Rocky.”

The film also spotlights three other dogs who, with their owners, have made an incredible impact on the laws protecting animals. These include Louis Vuitton, from Montgomery, Alabama, the first dog to test the Gucci Law; Susie from North Carolina, who has a felony abuse law named in her honor and was the 2015 American Humane Association’s Hero Dog of the Year; and Nitro from Queens, New York whose ultimate sacrifice in an Ohio kennel led to the state’s first felony animal abuse laws.

The completely crowd-funded film has an extensive social media presence with 68,000 Facebook fans, and tons of followers on Twitter and KickStarter. There have been numerous sold out regional screenings leading to wildly enthusiastic user reviews on IMDb.