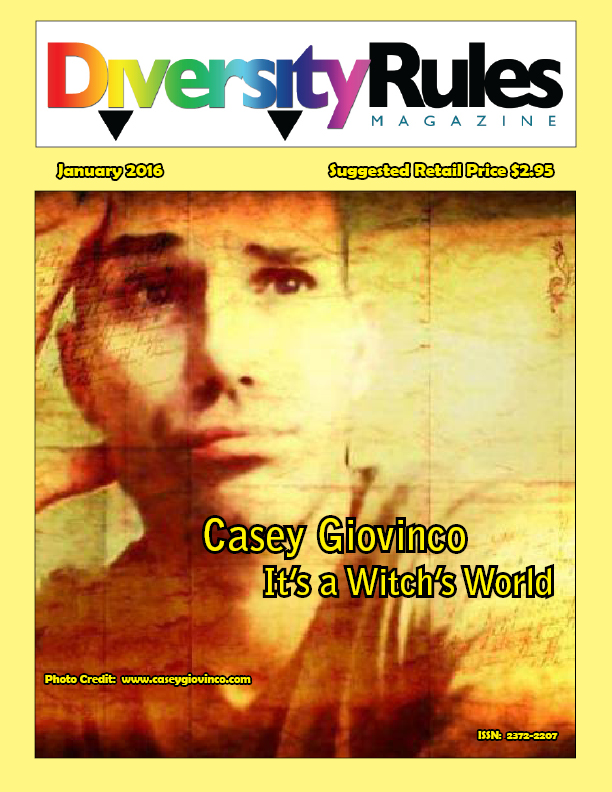 The January issue of Diversity Rules Magazine has been released!  This month’s issue features Casey Giovinco.  Casey Giovinco is a consulting hypnotist and a professional speaker who brings occult wisdom down to earth so that average people can utilize that wisdom to improve the quality of their lives. In 2011, Casey earned the status of Third Degree High Priest within Wicca. Over the past five years, he has been exploring the hidden history of gay men, uncovering gay mythology and folklore, which could be used to empower other gay men to reclaim their birthright as energy workers and healers. In 2013, Casey dedicated his first group of gay men into the online coven of Two Spirit Wicca, where he is currently training them to become Wiccan clergy.

In addition to Casey’s interview, also included in the January Issue:

Diary of a Black Man:  Diversity Rules Magazine welcomes back Tarringo Basile-Vaughn with his article entitled, “Time Never Answered Back.”

As you can see from the sampling above, the January issue is packed full of great information but you won’t be able to read it unless you subscribe, as Diversity Rules is now a subscription only publication. Don’t miss a single issue! Subscribe to the digital version of Diversity Rules Magazine at:

Please note that the PRINT COPY IS ON HIATUS temporarily but efforts are being made to get it back for those who like to hold magazines in their hands!

Diversity Rules can also be downloaded from the I-tunes APP Store.