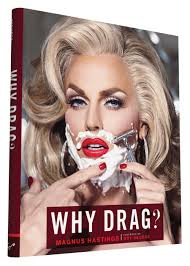 Available At Your Favorite Bookstore May 17th

Magnus Hastings’ new coffee-table book, Why Drag?, offers readers a rare glimpse at a generation in drag. Inspired by the photographer’s renowned New York art exhibition, Why Drag? began in the summer of 2014, when Hastings set out to travel through North America to shoot some of drag’s brightest talents and biggest names. With his camera in tow, Hastings made his way across the country for two years, snapping hundreds of intimate portraits while posing models the question: Why drag? The book offers answers from the industry’s top talent, in the form of gorgeous photos by Hastings accompanied by short stories that are marked by their humor and, oftentimes, sincerity. Queens featured in the book include Bianca Del Rio, Courtney Act, Jackie Beat, Adore Delano, Jinkx Monsoon, Lady Bunny, Detox, and Sharon Needles. The legendary Boy George writes the book’s foreword. Magnus Hastings’ “Why Drag?” is available everywhere books are sold on May 17 via Chronicle Books.

Magnus Hastings’ affection for his subject runs deep, and if only in his meticulous attention to detail, it shows in earnest from cover to cover. “I think a big part of Why Drag? is rooted in that little effeminate boy who was shamed out of doing what made him happy,” says Hastings. “I grew up resenting that childhood version of myself until one day, I had such a wave of love for him. I realized how extraordinary and beautiful he was, how fearless. Somehow I think this honors him.
”
Hastings’ reputation precedes him as the eminent man behind the lens when it comes to all things drag, so it only makes sense that his volume of drag portraits would push boundaries, provoke thought, and put the unapologetic on parade. Prevalent cityscapes include New York City, Los

Angeles, and the artist’s drag city of choice, San Francisco.

“I have such a soft spot for San Francisco drag,” says Hastings. “And the incredible way they create something for just one night. That’s kind of been skipped by the mainstream, but it’s a huge part of my book.”

Inside the pages, you’ll see pageant queens strut in full regalia while waiting for a bus. A pair of queens, one hundred pages apart, call upon the courage drag gives them to set aside anxiety, finding solace behind winged tips. Bianca Del Rio digs into a Barbie doll with pins and needles, reflecting on how drag lets her sharp tongue fly free, while Adore Delano gives great face in front of a McDonald’s while rocking a Budweiser one-piece, shot on the streets of West Hollywood.

“Adore Delano is a fantastic representation of an important side of drag,” says Hastings. “That punk rock, I-don’t-give-a-shit edge that gets watered down the more mainstream it gets. Drag is meant to be challenging and dangerous as far as I’m concerned, not safe
and sponsored by Disney.”

“Drag doesn’t make much sense.” So writes Alaska Thunderfuck, pictured off of Melrose Avenue. “It takes up all of your time, consumes most of your money, and may subject you to some of the most extreme ridicule on the planet.”

“But I imagine it is like being a nun or priest,” she continues. “Once you get the divine calling, you have no choice in the matter and you belong to drag for life.”

A testimony to the photographer’s talents as a portraitist, Why Drag? also serves as a timely reiteration that in a drag culture – where pushing boundaries is the exception rather than the rule – there will always be a need to stand up for grit.

“I want people who don’t know drag to be opened up to its beauty and its comedy,” says Hastings. “It’s a wonderland, and I want people to go there.”