Diversity Rules Magazine has always on the cusp of change and exploring new ways to present the issues of the day, as well as to highlight the remarkably talented gay and transgender men and women that comprise this wonderfully diverse rainbow tent we are part of.

Diversity Rules Magazine has been back in print since March 2013 as a subscription only publication.  Since its return to print in 2013 it has also entered the app world and is now available in the I-Tunes Store as well as Google Play Store for Android.  What changes are coming in the future?  Only the universe knows, but one thing for sure it will always have a presence in the independent gay media world.

Additionally, in 2014, Diversity Rules once again entered new territory into the broadcast media world with the inception of “Diversity Rules Magazine on the Air.” It is a weekly radio podcast that highlights the many diverse contributors to the magazine.

A brief history is in order… Diversity Rules Magazine began in May 2006 as a bi-monthly publication serving what was the Leatherstocking Region of New York, now known as Central New York. It initially was distributed to locations within Broome, Chenango, Madison, Montgomery, Oneida, Otsego and Schoharie Counties, as well as Delaware County. Its original mission was to focus on issues of sexual identity, gender, race relations, diversity and equality.

It began as a free publication, supported by advertisers and donations from those who supported the mission of the magazine.

Diversity Rules Magazine eventually grew and was distributed to locations beyond the counties mentioned above and eventually was being read throughout New York State and available in numerous distribution points.  It was the most widely distributed independent gay themed publication in New York State, for which I was very proud.

When the economy soured in 2009, Diversity Rules was not unlike so many other publications, and suffered economically and eventually ceased publishing.

After a brief hiatus it returned in March of 2010, as a widely distributed digital publication, being read in points literally across the globe.

In March of 2013 it came back to print as a subscription only monthly publication.  The free model just didn’t work out too well!

In its flagship edition, May/June 2006, the front cover article was entitled, “Why Diversity Rules?” It is reprinted 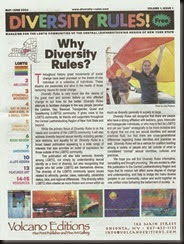 here.  Its mission today has not changed much from that developed at its original inception.

“Throughout history great movements of social change have been premised on the dream of one individual or a collective of individuals.

These dreams are passionate and alive in the hearts of those harboring visions of social change.

Diversity Rules is very much like the visions of the great men and women before us who affected change in our lives for the better. Diversity Rules attempts to facilitate changes in the way people perceive Lesbian, Gay, Bisexual, Transgender, Queer and Questioning (LGBTQ) community. It gives voice to to the LGBTQ community, its friends and supporters throughout the Central Leatherstocking Region of New York State and beyond.

While the primary focus of Diversity Rules is on the needs and concerns of the LGBTQ community, it will also address diversity beyond sexual identity, including gender, race relations, and equality for all. Diversity Rules is a broad based publication appealing to a wide range of interests that also provides an outlet of expression for those outside of the LGBTQ community.

This publication will also take seriously diversity among LGBTQ, not simply by understanding sexual identity as a form of diversity, but also recognizing that people who fall under LGBTQ are themselves diverse. The diversity of the LGBTQ community spans issues related to ethnicity, gender, class, nationality, citizenship status, race and regional differences. This diversity within LGBTQ often creates as much friction and unrest within as much as diversity generally in society at large.

Diversity Rules will recognize that there are people who have a strong affiliation with LGBTQ individuals, or who may in fact be LGBTQ and yet use “queer” strategically to be more inclusive and to signal that not only are sexual identities and sexual practices fluid, but that there are cross-generational differences regarding these identities and practices as well. Diversity Rules will be a vehicle for coalition building among a variety of people who fall outside of what is considered “normal” sexual identities, cultures and practices.

We hope you will find Diversity Rules informative, compelling and thought provoking. We are excited to offer this publication to the Central Leatherstocking Region and hope that its mission will effect some degree of change and understanding, and help to bridge the many diverse peoples in our community, nation and world together as one unified voice furthering the betterment of society.”

The original passion for equality and the respect for diversity has not ebbed since the magazine’s inception in 2006. Despite the economic trials and tribulations, the Editor of Diversity Rules has always maintained his focus and never lost sight of his vision for where Diversity Rules would progress. It’s demise was never an option.

Many challenges have been overcome to get Diversity Rules Magazine to where it is and still faced with challenges. The magazine contains a fine balance of all aspects of the rainbow tent, albeit, one component was a bit too much for most so I did have to drop that column. All that aside, I know there is a place where Diversity Rules can succeed and live on its own. Unfortunately, it is not at that point yet, but I will continue to strive to find it. I am not yet sure what the answer is or where the solution lays (lies?), but rest assured it will be found, given my tenacious nature.

To those who have supported me and this passion of mine, I do thank you and am very grateful for your support. Your belief in what Diversity Rules stands for means a lot to me. To my “atta boy” supporters, I thank you too, but I do wish some of you would take it to the next level and put your money where your mouth is. My word a $2.00 Indiegogo campaign investment wouldn’t have killed you would it? LOL.

I will continue to strive to find that balance between the print and digital worlds and attempt to continue to satisfy both desires/palettes, but one is much more difficult than the other without the financial support of readers, advertisers and those benefactors who just believe in the gay press. Additionally, my personal financial situation due to the life change I made a year ago is also impacting my ability to fund the magazine on my own.

With all that said, Diversity Rules Magazine will always have a presence and will serve the gay community diligently and steadfastly but it just may take a bit longer to find the ideal situation where it can exist on its own both in print and cyber form without the editor/publisher constantly having a headache from banging his head against the wall.

From this point forward, what can you do to help expand the reach of Diversity Rules Magazine even further?  There are a number of options by which you can express your support for the magazine’s mission; subscribe, advertise or be a benefactor.

Feel free to contact the editor for information on how you can be part of the mission of Diversity Rules Magazine as well as help shape its mission in the future.