One might ask “Why Diversity Rules?”  Why is such a publication needed?  Diversity Rules Magazine was conceived in 2006 because there was no gay voice in the Central New York area at the time. I wanted to create a publication that offered some sort of reassurance to closeted gay, bi and transgender individuals that there were others like them and that they did not have to feel alone and abandoned in a somewhat conservative part of upstate New York.

Since its inception in 2006 it has undergone many changes and iterations. It began as a bi-monthly publication serving what was known as the Central Leatherstocking Region of New York, now coined “Central New York.” It was initially distributed to locations within Broome, Chenango, Madison, Montgomery, Oneida, Otsego and Schoharie Counties, as well as Delaware County. Its original mission was to focus on issues of sexual identity, gender, race relations, diversity and equality.

It began as a free publication, supported by advertisers and donations from those who supported the 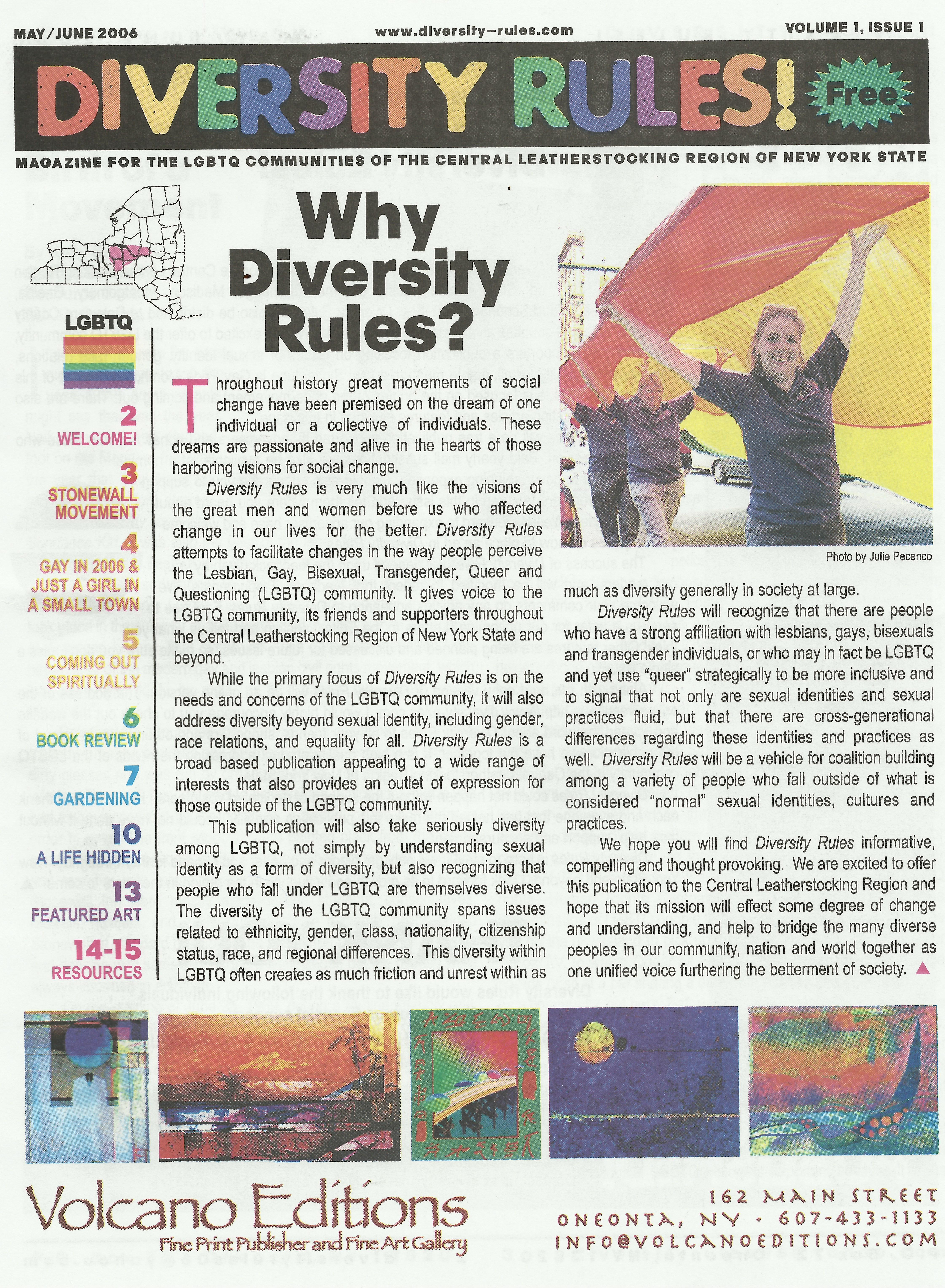 mission of the magazine. Due to its focus on the alternative community, fundraising and finding sponsors was a challenge (and still is), but that did not deter me from doing what I felt was the right thing to do. The first issue came out in May/June of 2006 with the lead article entitled, “Why Diversity Rules?”

Diversity Rules Magazine eventually grew and was distributed to locations beyond the counties mentioned above and eventually was being read throughout New York State and available at over 150 locations. It was the most widely distributed gay publication in the State of New York — a position I did not take lightly.

Due to its surge in popularity there also was increased scrutiny by the detractors of equality. In the spring of 2009, I received a very threatening e-mail entitled, “Cease and Desist,” in which I was threatened with physical harm if I did not cease publication.

Obviously, anyone that knows me personally is aware that such cowardly acts shrouded in anonymity do not scare me. While I was a bit unnerved at first and did take the issue to the police for investigation, it did not sway me, but only reinforced my resolve to continue. I consider this point in the history of Diversity Rules as a defining moment, and one which cemented my resolve to never stop publishing the magazine in some form or fashion.

When the economy soured in 2009, Diversity Rules was not unlike so many other publications, both gay and straight, and suffered economically and eventually ceased publishing. However, I never lost focus of its mission and vowed that it would return.

After a brief hiatus it did return as a widely distributed digital publication, being read literally throughout the world.

Beginning in March of 2013 Diversity Rules Magazine began printing again but as a subscription only monthly publication. The free model just didn’t seem feasible again after suffering financially with the economic collapse of 2009.

The subscription only version chugged along nicely but alas, due to personal financial circumstances, I once again had to suspend its publication in August of 2014. It reverted to its current digital form but added other digital venues by which it could be accessed such as an Itunes smart phone app, which has become very popular.

Stay tuned folks… the show isn’t over yet!