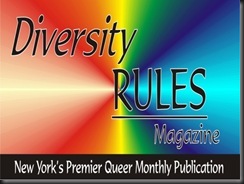 Throughout history great movements of social change have been premised on the dreams of one individual or a group of individuals.  These dreams are passionate and alive in the hearts of those harboring visions for social change.

While the focus of Diversity Rules is on the needs and concerns of the queer community, it also addresses diversity beyond sexual identity, including gender, race relations, and equality for all.  It is a broad based publication appealing to a wide range of interests that also provides an outlet for expression for those outside the queer community.

The publication also takes seriously diversity among the queer family, not simply by understanding sexual identify as a form of diversity, but also recognizing that people who fall under the queer tent are themselves diverse.  The diversity of the queer tent spans issues related to ethnicity, gender, class, nationality, citizenship status, race and regional differences.  The diversity within the queer world, often creates as much friction and unrest within as much as diversity generally in society at large.

As a point of history, the publication started in May of 2006 out of my desire to provide a print media geared toward the queer community and its interests, since in this part of New York there was no such publication. It was initially designed to provide a vehicle for coalition building among people of differing backgrounds and to educate people on what the queer community is and isn’t and was limited to the Central New York region. As the months progressed, the publication expanded to many parts of New York State.

Unfortunately due to the bad economy, the print version ceased publishing. However after a brief hiatus, it retuned in March of 2011 as a digital publication, with the intent to have a print copy once again, when resources allow.

While the primary focus of the magazine has not changed since its original inception, I also see the magazine as a way to provide aspiring writers a forum to express themselves, who may not be able to break into the more mainline media outlets.  It is also for others to promote projects and causes they are passionate about.  There are few restrictions on content, and some content has been on the edge, being insightful and questioning core beliefs and perceptions of the queer community.

With each monthly issue, the readership and exposure to the magazine increases, as does my passion for what it represents as well as my desire to get Diversity Rules back in print again.

To that end, I have begun a fundraising campaign to pay off some straggling debt from when it was being printed and to lay the groundwork for returning it as a print medium as well as a digital one.  An IndieGoGo campaign has been started and a Kickstarter campaign in being developed as well.

The vision of Diversity Rules is still intact.  With your support, it can and will become a stable voice for the queer community for many years to come.  Feel free to contact me if you have any thoughts, questions or ideas regarding the magazine and it’s mission at:  [email protected].

We have the power to change the world for the better.  Together we can!