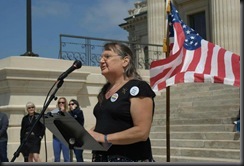 Stephanie Mott is a transsexual Christian woman from Topeka, Kansas. She is executive director of Kansas Statewide Transgender Education Project and state chair of Kansas Equality Coalition. She began her transition in 2006 and had gender affirmation surgery in Bangkok, Thailand in May, 2012. She can be reached at [email protected]

I received my proof of feminism card in the mail this week. I joined the National Organization for Women (NOW) because I have become oh-so-much-more aware of women’s issues. I read an article in the local paper yesterday about a man who was arrested for rape. Because of my now 39-day-old vagina, it seemed more personal than before. This truth becomes the exclamation point on a sentence that has been writing itself on my soul from the beginning of my transition.

Why are women’s issues more personal now that I am seen as a woman? Or perhaps – Why weren’t women’s issues this personal before? It is never easy to investigate our shortcomings. It is, however, a mechanism of growth. And growth is the one-word definition that I have come to see as the human endeavor.

When I was living as a man, I believed I was not using male privilege to my advantage. That would only be possible if I actively worked to change the forces that create male privilege.

I was taught the value of my opinion as a child, because I was perceived to be male. I grew up in the 1960s. My father told my sisters they didn’t need to know math. He taught me to think for myself, and to have great conviction of my beliefs.

The Diagnostic and Statistical Manual for Mental Disorders has an exception for the diagnosis of gender identity disorder. If a person wants to be the other sex because of a perceived increase in power, it is not a mental disorder.

In my transition, I have experienced many of the unfortunate truths that still exist in society with respect to women. In many state legislatures across the country, the horrendous attack on women’s rights has continued and escalated.

I have been moved to activism in women’s rights issues. When I was asked to speak on the LGBT perspective at a women’s right rally, I took an honest look at how these two movements are connected. I realized that women’s issues are the same as LGBT issues. Anything that conflicts with a particular interpretation of the male-female binary is considered, by many, to be inappropriate.

For the first time in my life, I am no longer taking advantage of male privilege. I am fighting to change it. I could have done this before, but I didn’t.

Then I read the article about the rapist. Because I now have a vagina, the feelings were different than before. Why had rape become more personal? I have sisters and nieces. Why wasn’t this as personal before?

It is important to share a transgender truth about rape. For a pre-op transgender woman, rape attempts lead to the discovery of male anatomy, and a greater likelihood that the rapist will also commit murder.

Rape is not more personal to me today. It is personal in a different way. The question has changed. No longer – Why wasn’t this so personal to me before I had a vagina? Now – What can I do to bring an end to violence and discrimination against women?

When Kari Ann Rinker, Kansas State Coordinator for NOW, introduced me to speak at the women’s rights rally she said, “The heart of a feminist is not born chromosomally. It is not born with you with your lady parts. It is something you tap into and you feel with all of your being.”

It’s not about having a vagina or about being a man or a woman. Not about being gay, straight, lesbian, bisexual, or transgender. It is about being aware and educated. There are no other requirements.