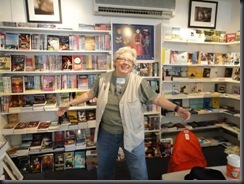 Okay, so there are a few who stare mutely at my Bo Obama button, mouths open, like they still can’t believe they lost to us commie hippie queer vile and disgusting President Obama-supporters, but that’s what watching FOX TV can do to people. The station is a teleprompter for viewers, scrolling non-stop scripts detailing what to think, say and do in the voting booths.

The rest of us appear to be doing happy dances.  Today a white clerk at Publix, looking at the Bo button, said, “So you’re happy about how the election went?” A little wary, I answered, “Yes, I am.” Then I asked, “Are you?”  “Oh, yes,” she replied, smiling, “I am!”

Yesterday, another compete stranger, grinning madly, commented, “We did it!” I said, “Yes, we did.” She kind of quietly sang, “It’s about time.”  Our eyes held and I echoed, “Yes, we can.”

Before the election, people weren’t as articulate. “I like your button,” was something I heard a lot.  They were worried. So was I.  My sweetheart and I live in a conservative stronghold. There were roads on which I could not bear drive because the plethora of Romney/Ryan signs were too disheartening. One local candidate identified herself in red, white and blue as a conservative Republican.  Sprinkled among the vote-for-me signs were big, loud, black on white warnings: “Fire Obama.”

It wasn’t about the man, we all knew that. This confrontational campaigning was about fear.  Racism, many of us acknowledged to one another. That was one word not used on the campaign trails. But you could hear it behind the name-calling: commies, homosexuals, and that most derogatory of words, women.

Yeah, well, that backfired. More women than ever are running this country now and more people could give a fig about gays marrying. The racism, though, you can’t make much headway against that. Millions of Americans see our President as a precedent they want to discourage. You could see terror shaking the forests of placards, you could hear prayers begging the heavens to keep public offices white.

I saw one Obama sign during all those weeks of campaigning. Republican-voting people slapped R/R bumper stickers on their cars, next to “My Child Is a Terrific Kid!” and stick figure families depicting the drivers’ procreational rates of success. Obama stickers, not so much. The revolution is pretty quiet around here.

Here being Florida, where lines of voters stretched around the block in some towns. Where three days after the election, votes are still being tabulated. Where so many voting sites had problems, hanging chads became ancient history. Where wildly divisive Representative Allen West is suing somebody, anybody, everybody because he lost to a 29 year-old Democrat who believes in unifying.

During the last two weeks before the election, a retirement-aged white guy set up shop on a strip of grass along a local highway here in the land of a-church-on-every-corner. He planted his Republican placard forest and sat in a lawn chair next to a flashy classic Corvette, held an American flag, and waved to drivers for hours.  Surprisingly few horns honked in support as they sped by. There was a whiff of desperation about his lone electioneering. I saw it again on the grim face of a woman in a Romney t-shirt, as if the world as she knew it would end if her candidate lost.

She was right to be grim, just as the flag waver was right to be desperate. An NPR commentator said that the pattern of votes cast in this state demonstrates that people are actually using reason. The long lines are at least partly due to the length of Florida’s ballot, pages of it. Floridians voted down almost all proposed amendments to the constitution and the three that passed evidenced a compassion for the low income elderly, first responders, veterans and military widows.

So thank you to the friend who gave me the Bo button. Thank you to my sweetheart who writes:

I’d like to live in a bluer state, but while here, I’m doing happy dances with everyone who acknowledges my Bo button.