A Book By Brendan Spratt 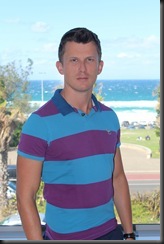 Brendan Spratt was born and raised in Dublin, Ireland. Although his father was heavily involved in the local Gaelic football club, Brendan’s mother recognised he was far too fabulous to get dirty on a pitch and instead enrolled him in the Billie Barry stage school. Leaving school, Brendan worked as a professional dancer while completing a degree in Electronic Media. Brendan has worked as a writer on the UK soap Emmerdale and currently writes for RTE’s longest running drama Fair City. He lives in Dublin city with his partner Gavin and their dog Rufus.

Special Nobody is the story of a young, gay man who has broken down at the crossroads of life, the teenager he once was and the man he aspires to become.

Have you ever woken up in hospital after a wild night out?

At 22, Jason L’Estrange should have the world at his feet. Instead, he wakes on a dismal hospital ward to discover he’s a broken foot and a multitude of other injuries.

Learning he plunged down the stairs of Dublin’s seediest nightclub, Jason has no recollection if he fell or was pushed and the hospital psychiatrist is questioning if he may have had any reason to harm himself?

Special Nobody intertwines between Jason’s teenage years and one crazy night out in Dublin when secrets thought long buried returned and threatened to destroy his friendships. The invisible boy who sits isolated in the corner of every school classroom, Jason spent his teenage years suffocating his emerging sexuality and dreaming of a future where he didn’t have to fight to survive. Struggling with a past littered with unanswered questions, Jason reflects on how the desolate teen that fought to prove he had potential has ended up in a dire situation.

Heart-warming but gritty and honest, Special Nobody is the realistic story of a flawed young adult and will appeal to other young adults and those who remember how hard it can be to find your way in life. No vampires or wizards, this is sex, drugs and dance music and guarantees to take the reader on a roller coaster of a ride.

Available now on Amazon for kindle, Barnes and Noble for Nook, Kobo and coming soon to iBooks and all other digital book stores. Special Nobody might be a gay’s story but it ain’t a fairy tale.

SPECIAL NOBODY
BY BRENDAN SPRATT!