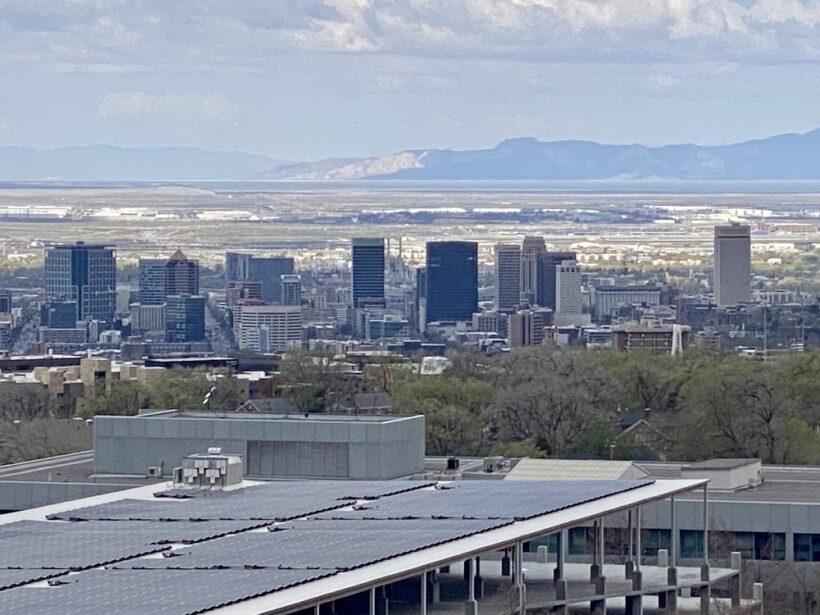 For years I have heard about Salt Lake City’s thriving LGBTQ community, but I had yet to experience it firsthand. The Advocate even called Salt Lake City, one of the ten ‘Queerest Cities in America.’ Recently, I had an opportunity to travel to the Beehive State with my good friend and internationally known EDM musician Joey Suarez, for a Pride Journeys tour, where we had a chance to revel in the city’s attractions and culinary scene and see what all the hype was about.

Our Pride Journeys home base for the visit was the fabulous Hotel Monaco, part of the Kimpton collection of hotels. Kimpton is well-known for being one of the most LGBTQ-friendly chains in the country, so I knew we were in good hands. The property features a welcoming lobby, fitness center, and two culinary options: Bambara and The Vault and is within walking distance to almost every attraction in the city.

Begin your first day in Salt Lake City with a trip to Eva’s Bakery, a wonderful little establishment offering freshly baked goods and a variety of homemade breakfast items. I decided to try their Roasted Beet & Avocado Toast which was served with potatoes and organic greens. This was a perfect option for those who enjoy a savory breakfast item over something sweet, although Eva’s has a nice selection of sweet treats to choose from if you prefer.

Just a short drive away from downtown is the Natural History Museum of Utah. The beautifully designed building blends in perfectly with the natural surroundings of the mountains and contains quite the selection of dinosaur fossils and gemstones, most of which were discovered locally. The museum boasts an extensive paleontology program and possesses nearly 30,000 specimens in its collection.

Next, swing by Tracy Aviary, one of only two free-standing aviaries in the country, and say hello to Andy, the Andean condor as well as the Chilean flamingos. The aviary also offers unique experiences where guests can participate to get up close and personal with some of their feathered attractions. Don’t forget to stop by the South American Pavilion featuring 30 South American birds nestled amongst lush plants in a unique indoor-outdoor exhibit.

Salt Lake City’s international culinary scene is something the city is proud of and one of its shining stars is a Japanese restaurant called Takashi. Joey and I ordered four dishes to share, each prepared perfectly. Our favorites included the Magic Dragon roll as well as the Tiger’s Roll featuring tiger shrimp tempura with spiced crab, kaiware sprouts, unagi, and avocado, topped with eel sauce and sesame seeds.

For some fun Pride Journeys entertainment, head to Why Kiki, a tiki bar-themed venue just a few blocks from the hotel which recently started weekend Drag Lunch – no, not exactly brunch, as some performances occur after standard brunch hours. The intimate venue is a wonderful place to catch a performance by one of Salt Lake’s fabulous drag performers while sipping a delicious tropical cocktail.

Adventure seekers can go on a hike along with one of the city’s numerous trails. On one crisp morning, we headed to a trail nicknamed “The Living Room” due to the rock formation at the top of the mountain that resembles a couch, or so I’ve been told. We made it about three-fourths the way to the top before we had to stop from exhaustion due to the altitude. Yes, I’ll blame the altitude. Don’t despair, there are many picturesque vantage points along the way to capture that perfect Instagram photo.

For dinner, head to Manoli’s, a tapas-style Greek restaurant that offers a variety of traditional dishes as well as some modern twists on Greek specialties. While Joey dined on a sumptuous lamb burger, I tried the Garides, which were grilled shrimp cooked in a Greek coffee BBQ sauce served over seared polenta. We decided to share an order of Spanakopita which is a savory phyllo-filled pastry stuffed with feta and spinach and served with an artichoke cream sauce. I love Spanakopita and Manoli’s didn’t disappoint. However, the best part of the meal was the cinnamon ice cream, which was probably one of my favorite ice cream dishes ever!

When I lived in Nashville, I published an LGBTQ magazine called UNITE, and one of our issues’ featured country music superstar Eric Church on the cover. He is country music’s answer to Bruce Springsteen, so much one of his biggest hit songs is titled “Springsteen.” We had the opportunity to attend the Eric Church concert at the Vivint Arena, home of the Utah Jazz. While it would have been fun to experience a basketball game, hearing 15,000 people sing Church’s hit songs was quite memorable.

After the concert, it was time to explore Salt Lake’s nightlife. Located on Harvey Milk Boulevard is Milk+, a swanky new LGBTQ club that would rival most major cities. Milk+ offers a huge dancefloor, stage, patio, and table seating to enjoy a cocktail or food. The eye candy was abundant, and the bar staff was quite friendly. All the entertainment occurs in one large open room so the venue mixes drag and dancing most of the evening.

Another bar worth visiting is The Sun Trapp, which is within walking distance of Hotel Monaco. With limited time, it was impossible to visit all the nightlife establishments, but I think I got a good taste of what Salt Lake City had to offer. I began to see why the city was voted one of the most queer-friendly cities in the country.

For more Pride Journeys columns, head to the BLOG!