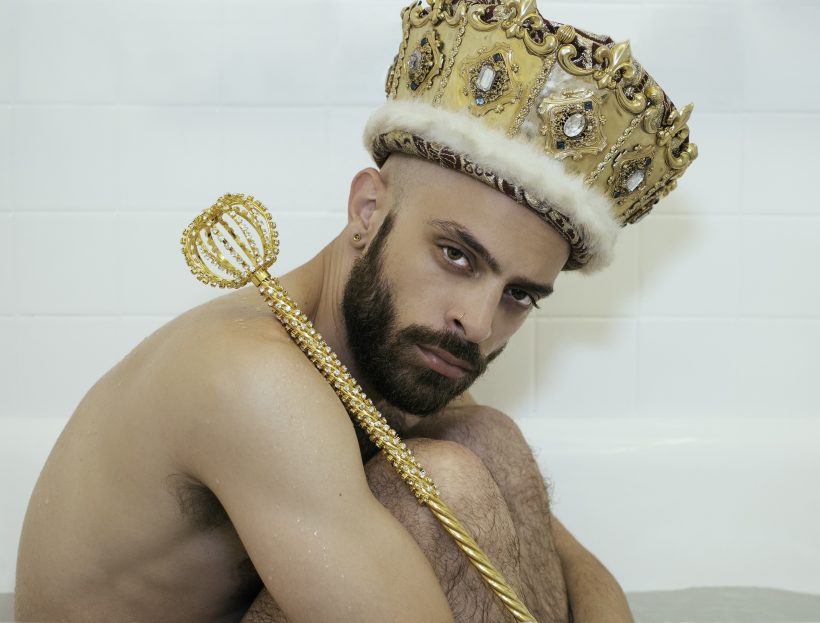 The Hound is releasing his debut single, “Can’t Let You Go,” off his upcoming album. “Can’t Let You Go” is electronic pop with a passionate, heartfelt message about the dangers of a toxic love. Written and produced by the artist, The Hound admits to being in a low place in life when creating the song. “I didn’t know what I wanted anymore,” he explains. “I was very depressed and found myself in an incredibly toxic relationship with someone who suffered extreme highs and lows, and I was coming to terms with the fact that just because its love, doesn’t make it right. People also love heroin and meth, and he was definitely like a drug to me. It took everything falling apart for me to finally walk away.” Along with the track, The Hound has released a music video that stars gay adult film performer Adam Ramzi as his ex boyfriend. The Hounds’ “Can’t Let You Go” is available on iTunes, Spotify and all digital platforms. The music video is available on Youtube.

The Hound grew up in Santa Clarita, a suburb outside of Los Angeles. Before learning to play an instrument, he would record instrumental tracks from videos games and create vocal melodies using lyrics from Shel Silverstein. “I was an only child with a single mom, so I had a lot of time to be creative with my thoughts and imagination.”

To check out the video for “Can’t Let You Go,” go to: www.thehoundmusic.com.

JRK: Before we get into the interview, can you tell readers a bit about yourself, where you came from and all that good introductory stuff?

H: My name is John Constantine (aka The Hound), I’m a Virgo/Gemini rising 31 year old who loves to tell stories – particularly through melody and performance. I come from a land far far away in Los Angeles, CA called the valley and studied opera as a teenager at the LA County High School for the Arts. I went to college at the Musicians Institute (mostly because Jeff Buckley graduated there) and studied recording engineering. I moved up to San Francisco with my best friend and formed a band called Orchid and Hound. During that time I also worked at One Little Indian Records, a label that was home to my biggest idol – Björk. Once the music industry imploded in early 2007-ish, I started working for myself and gigging with my band. We released three records and performed across California, played a showcase at South by Southwest, and had the opportunity to open up for Julia Marcell in Berlin. A couple of years ago I moved to downtown Los Angeles, where I’m surrounded by a booming scene of creative queers and a tight knit family of misfits.

JRK: Where is the name “The Hound” derived from?

H: The beginning of 2017 was particularly emotionally hard for me. I had been struggling with depression and felt like all the things that used to make me happy just didn’t anymore. I was lost and didn’t know what to do. It wasn’t healthy, but I burned a lot of bridges and started from scratch. I needed to practice self care, and for me that was discovering the music I could create on my own. I love my band, and became an adult while we were growing as artists, which is why I kept my half of the name. In part it honors my past, and it’s also how I identify as an artist. Plus I’m pretty sure DC Comics owns all the rights to everything John Constantine.

JRK: You have a new single out called, “Can’t Let You Go.” Can you tell us about that and what meaning it has for you?

H: I wrote the song after a tumultuous relationship and difficult breakup. I knew it was going to crash and burn, and I ignored all the warning signs until we hit bottom. One night after we basically said we’d never speak again, I sat down to write. It was one of those songs that wrote itself, everything from the chord structure to the string arrangements, the melody and lyrics – it was like I was channeling the song into existence. I wrote, produced, and recorded it all in one evening. The lyrics had a specific meaning to me when I wrote it, but over time I’ve discovered that it applies to so many other types of relationships and situations.

JRK: Can you tell us about your video for “Can’t Let You Go?”

H: I knew that I wanted the video to have a strong storyline, something that you could enjoy even if the sound was on mute. I had been revisiting Alanis Morrisette’s Jagged Little Pill, and there’s a song on the album called Your House where she basically breaks in to her exes apartment and spends an afternoon there. That was the starting point in developing the story for the video. I didn’t want the audience to know exactly what was going on until the third act. I imagined the story to be told with choreography, so I worked with Andrew Pearson who came up with beautiful movements that brought it all to life. The final result is a video that I’m incredibly proud of, and so many viewers have sent me messages about how they related to the story – which is more than I could have ever asked for.

JRK: You have stated that music was an escape for you when you were a child. Can you tell us how so?

H: I’m an only child, and my parents got divorced when I was very young. My dad was an alcoholic and never had a steady job or income, so my mom had to work three jobs to keep food on the table. I spent a lot of time alone with a babysitter. I would be in my room listening to music and singing to myself for hours. My cousin had given me her yellow sport Walkman with Janet Jackson’s Escapade cassette single. Side A was the radio single and Side B had the instrumental track. Using my stuffed animal collection as an audience, I would perform Escapade over and over again. Eventually my music collection grew and I had a setlist that included Michael Jackson, Whitney Houston, and Mariah Carey. When I was singing, I was present, and I wasn’t thinking about anything else. Any pain that I was going through washed away when the music started. I knew that one day life would get better, and I would have songs of my own. It’s all I ever wanted to do.

JRK: Bullying is a terrible thing in a young person’s life. You were bullied as a child. Can you tell us why, and how you reacted to the bullying?

H: Elementary school through junior high were tough years for me. I was always performing, so I was an easy target for the hyper masculine insecure boys. One of the hardest things I remember was at an awards assembly when I was being honored for planning and organizing the student activities for the year. A few kids that always picked on me started booing and yelling “faggot,” and then the entire auditorium joined in until the faculty tried to resolve the situation. I was standing there, next to my favorite teacher, and she put her arm around me and kept whispering “stay strong.” I did, and just kind of bit my lip until the ceremony ended. The students filed out of the room and left, leaving me and my teacher alone in the auditorium. I broke down in fetal position, inconsolable, and feeling like this bullying would never end. Luckily, I was accepted into an arts high school where I found my tribe and I never had to see those people again. Or so I thought. Years later when I was in my early twenties, I was living in San Francisco and went to a house party where I ran into one of those boys who made my life a living hell. I don’t know what I expected, but he was so excited to see me and hugged me like we were childhood friends. I was in the twilight zone, it was like none of that had ever happened. Maybe he forgot, or maybe he remembered and the guilt was too much for him to bare. Whatever the case, I didn’t bring it up, and as time went by I actually got to know him as an adult and he turned into a decent guy. I don’t know what some of those kids went through at home, but I can’t imagine they had great parents. I forgive them, but it doesn’t mean I don’t still deal with the trauma – because I really do. I’ve had severe anxiety my whole life and suffer from panic attacks. But I love my life and who I am today – and as difficult as those experiences were, I don’t know if I would be the creative person I am today without them. I made it through, and I have the tools to help me cope.

JRK: What would you say to a young child or adolescent who is being bullied?

H: If you are being bullied, it is not because of you. You are not the problem, you are not broken, you are doing nothing wrong. Talk to a teacher you can trust, find a friend who is unconditionally supportive. If you don’t have those resources, we are here for you when you are old enough to make your own decisions. Your tribe is out there, and we will embrace you with open arms.

JRK: Generally, what are your songs about?

H: I’m generally a pessimist, so a lot of my music is fueled by personal struggles, existential crisis, or the unraveling of the world as we know it. It’s not unusual for a musician to see the glass half empty, it’s one of the biggest reasons why most of us escape in music. However, it’s a goal of mine to write songs that aren’t always in a minor key. We’ll see how well that goes… It’s been an interesting journey with this song and music video, because the response has been so positive and I’ve been getting opportunities that I’ve always dreamed of. So, I think I’m on the right track to finally writing that happy song. I know my mom would really love that.

JRK: What parting thoughts would you like to leave Diversity Rules readers?

H: Everyone has a story to tell, even the people who you think are ordinary, the bullies, or the people who seem to have it all. Storytelling is at the core of everyones lives. In our conversations, entertainment, shared experiences – we are all captivated by a good story. I think the world needs to listen to them more. A lot of learning and healing can come out of listening to someones experience. Sometimes those stories are told with a great melody – which what I hope to do now and for the rest of my life. As Kate Bush brilliantly sang, “Let’s exchange the experience.”