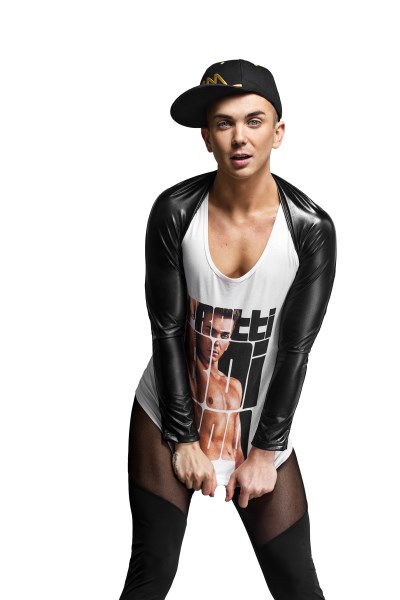 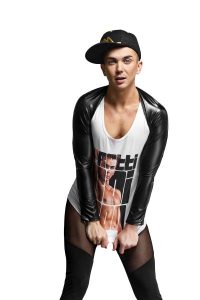 PrettiBoiRoq (born Cory Ray Tyndall; 31 March 1989) is an American rapper, songwriter, model, and actor. Born in New Bern, NC and raised in Pamlico County, NC, Cory moved to California at the age of 23 to pursue a career in hip-hop music after struggling to find a platform in his home state, residing initially in Orange County, then to Los Angeles. He earned local recognition after performing original tracks and covers with an all-male cabaret group called The Foxes.

PrettiBoiRoq released the music video for “Wanna Be Me,” the first single off his upcoming “Haus of Ken” EP, on October 12. Recorded in Los Angeles, California and produced by ASIDE, the song is about self-empowerment and confidence. PrettiBoiRoq wrote it in response to comments he received after the music video for his previous single, “You Don’t Own Me,” went viral on the internet.

JRK: Before we get into the interview, can you tell readers a bit about PrettiBoiRoq, your background, where you are from and all that other good introductory stuff?

PBQ: Well, I grew up in a very rural town in North Carolina. We didn’t have a lot of money growing up, so me and my brothers had to find creative outlets. I was the artist, always drawing, coloring, singing, dancing, my professor called me the renaissance man. After leaving college I was stuck. I knew I didn’t want to spend the rest of my life in my home town, so in January 2014 I packed my car and me and my best friend James drove across the country to Anaheim, California. Since then I have spent every day pursuing my dream and perfecting my craft. PrettiBoiRoq was officially born in December 2015 with my first single “PrettiBoi Anthym”.

JRK: You recently released a video for your new single, “Wanna Be Me.” Can you tell us what the song is all about?

PBR: I think it’s a fun song, it was written amidst a lot of the trolling I received over the internet when the video for “You Don’t Own Me” was released. At the time I was going through some personal issues, and the combination of the two almost made me quit music. This track is a jab back at everyone and everything that was negative in my life at the time, while the video is a little more tongue and cheek. In a lot of ways this track helped me get my career back on track.

JRK: Many told you that you had no talent and you were body shamed for your appearance. Bullying can be a terrifying experience for a young queer person, especially growing up in North Carolina as you did. Can you tell us a bit about those experiences and how you dealt with it?

PBR: I would be lying if I said I took it well, as I said earlier it made me want to just give up. I feel like a lot of kids in our community grow up being bullied and feeling like outcasts, which is why it honestly upset me to see so many hurtful comments. I grew up with comments about my weight, about my sexuality, and it really leaves an impression on you. I felt like I had moved past it before I moved to LA, but this town can really break you’re not ready. In the end, though you have to know your self-worth, know your talent, and pursue your passion. I keep moving forward, for my fans and my friends who believe in me.

JRK: What advice would you give to someone who has been or is being bullied?

PBR: No matter what people say, they will never know your worth. Only you know who you are and what you are capable of. Never let negative energy stop you from being who you want to be. I feel like when people bully others, they are just projecting their own insecurities onto you. I mean, words will always hurt, and I could preach about letting it roll off your back, but at the end of the day its more about perseverance and knowing that it gets better.

JRK: Your story is about empowerment and overcoming. What are the motivations that you have instilled within yourself because of your past that empower you and drive you to continue to overcome your obstacles and those who say you can’t do something?

PBR: I feel like originally my motivation was to prove everyone wrong. I’ve spent my whole life fighting to prove myself to others. Whether it be moving out on my own, or getting into a university, I have always been a fighter. But as I progress in my career I worry less about proving myself to others, and more about proving myself to me. I set goals and I accomplish them. If you believe in yourself, the universe will provide the rest.

JRK: You released a number of albums prior to your most recent one. Can you tell us about those and what they were about?

PBR: My first EP was really just me honing my skills and proving what I can do as an artist. I can really hear the growth between my first track to my latest. Some of the tracks that really stick out to me personally are “NEW SH!T,” which I wrote about my friend group back home, and “Carpe Diem” which is about me leaving home to pursue my career. As far as the singles I have released after my favorite would have to be “NEXT” featuring HYM, it’s a fun track that takes a light-hearted approach in confronting the stereotypes and divisiveness of the gay dating scene.

JRK: In this very discouraging political environment we live in now — one that does not celebrate diversity and those who are different — what can we do as individuals to overcome the hate and still rise above it all and be who we are meant to be?

PBR: Well I think growing up where I did I was always surrounded by intolerance and hate. Unfortunately, we live in a country now where the President can call himself a “Nationalist” and be met with applause. I think the communities that our most affected by our current political situation need to ban together and prove that we will not be defeated or brainwashed by backwards thinking politicians. Stick to our agenda, stand for one another, and no matter what they throw at us, remain true to your culture and yourself.

JRK: Your tag line on your website says you are bringing “southern hip hop to a whole new audience.” What do you mean by that and how are you doing it?

PBR: I grew up listening to southern rappers like T.I. and Lil Wayne, and I feel like my roots have influenced my sound. The artist I have worked with chose to work with me because my sound is unique in LA. The gay community has a lot of talented rappers, but I feel most of them have more of a West Coast style. I want to bring my southern class as it were to my music, I think the genre as a whole is lacking in that department, especially within our community.

JRK: What is next for PrettiBoiRoq?

PBR: Well, I am hard at work promoting my new single. Also, I am in the studio working on my next body of work “Haus of Ken,” which is slated to release early 2019. I feel like I have grown astronomically with this upcoming EP and I can’t wait to share it! Other than that, I am looking forward to a few performances to close out 2018.

PBR: Yes! Check out my new single “Wanna Be Me,” I promise you’ll love it. Other than that, just remember, you’ll never see a hater doing better than you. As a wise friend once told me, the only reason they are attacking you, is because they want to be you. Stay tuned everyone, I promise this is only the beginning!