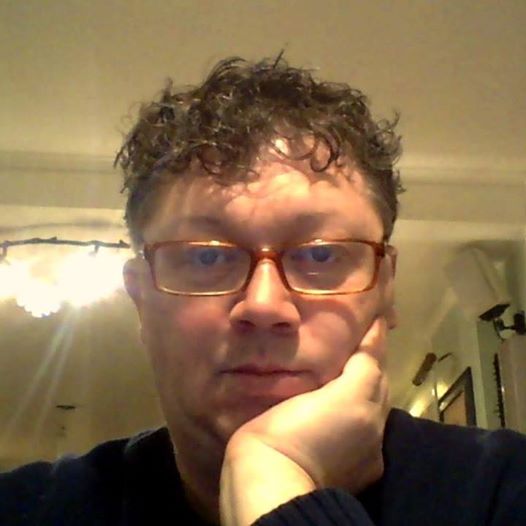 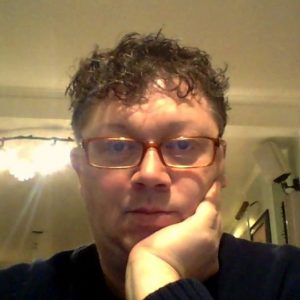 Locally born and raised, James developed a gift for writing in high school. He continued writing through college and has many followers and fans of his work. His writing spans the generations. He is currently working on his first short story.

I look into the sky and I see him. He has come home, returned from his summer’s journey.

His familiar form excites me. I am comforted by him and the warmth he gives, even on the coldest of winter nights.

He watches over me while I slumber, I feel his presence until the sun chases him away.

Hiding then, I know he’ll return when night falls. He’ll come back to hunt and protect, only to disappear when the light comes.

We see each other at night, for it is the only time he allows me to see him, meeting in the darkness as if lovers having a secret rendezvous. He’s easy to find for the moon goddess guaranteed this (1). This repeats itself every day.

Ours is a love that comforts, excites, saddens and hurts. A love that can never be for I give of myself and he gives nothing in return.

Enjoying one another’s company; laughing, smiling, loving. Then clouds roll in, filling the spaces between us, tearing us apart. I know he’s still there watching, protecting, loving.

All too soon it comes to an end. As springtime approaches, he nears the horizon, impatiently awaiting his departure, never content to be in one place for too long. Always looking for the quick exit to his next hunt when he feels wounded.

The crocus blossoms appear and part of me fades, for I know it is time for him to go. He leaves the north to wander until the leaves change colors, and then he returns. Where he goes, I don’t know. Why does he leave as the days get longer?

Is there another he comforts and protects? Is there another whom he loves? Is it Merope (2) who calls, beckoning him away from me? Or the Scorpion peering over the horizon?

Falling apart on the inside, my heart is shattered when he goes. I am alone once more until the cold and darkness cycle again, slowly destroying me.

I beg him to stay, I will be lost without him, but he still goes. Leaving quietly in the light without saying goodbye, so I won’t see him leave, he takes a part of me. My heart goes with him on his summertime journey.

I know we’ll see each other again, but exactly when I know not. I just know when the leaves start to fall, he’ll be there watching over me once more.

Thinking of him a smile appears upon my face, thoughts of him warm and comfort me.

When he hurts I feel it too, even when we’re apart, no matter the distance. When he cries my tears flow as well, a part of me dies each time.

Wanting to hold him in my arms, comfort him and love him he pushes me away as if he is scared of getting too close, afraid of love. An eternal love deeper than the oceans of his father’s rule (3) and more vast than the sky he travels.

He holds my heart in his hands, but yet doesn’t seem to notice. He loves with all his being but conceals it.

His watchful eye and protectiveness are proof. This is how I know he cares.

He keeps me safe from the dangers coming at me. Protecting me from hurt but always guarded against allowing me to do the same for him in return. He observes with a strained indifference.

The Warrior (4) has an air of bravado and a tender heart. He’s quick to anger but I’ve seen his vulnerability, the scorpion’s sting (5) penetrating deep into the flesh. He showed it once to me, I cried his tears with him.

His sadness and hurt are apparent to me. His expressive eyes give him away and let me in. They have allowed me a glimpse into his soul. The feelings, fears, dreams and emotions he struggles to keep hidden.

Looking into his eyes I know his hurt, see his torment and feel the love he holds back and tries to mask.

He is Apollo disguising his protective jealousy and I Artemis, spirited and strong yet tender and weak. We’re twin souls.(6) For one of us, our connection is taboo, something to be pushed away and hidden forever. For the other, it is very real.

Al Babadur (7) hurts and his hurt becomes mine because of our connection. There is an unspoken, unacknowledged bond between us stronger than the blood of birthright. A bond created by the universe, resilient, enduring and unyielding.

His is a world of conflicting emotions and mixed messages. A self-imposed servitude he chooses to live in, keeping himself distanced, out of fear or personal obligation I know not.

He listens with an empathetic genuine ear but shares little in return.

There are nights he allows me to see all of him and then there are those he hides behind the horizon, guarded but visible.

It is said that love is blind, as is he. What is this fear that is preventing him from opening his heart? Lost identity?…self?…world? Did Oenopion (2) take that from him too?

We don’t have the choice we think we do over whom we fall in love with. It has never been ours to make, for love is a force of nature.

I look into the sky and I see him but his indifference and fear of vulnerability keep him guarded and distanced, hurt and torn, locked away in a prison of his own undoing that he created for himself.

(1) In Greek myth, the goddess Artemis (goddess of Wild Animals and of the Moon) fell in love with the handsome Orion. Her brother, Apollo, did not like this, and plotted to destroy Orion. One day while Orion was swimming, Apollo walked by with Artemis. Apollo challenged her to hit the target bobbing in the water. Artemis did not know it was the head of Orion, and shot her arrow. The arrow struck Orion in the head killing him. When Orion’s body washed ashore by the waves, Artemis was horrified to see her arrow and to learn that she had been tricked by Apollo. In great sadness she tenderly placed the body of Orion in her silver Moon-chariot an carried him high up into the sky. Then finding the darkest place, so that his stars would shine the brightest of all surrounding stars, she placed him where we see him today.

(2) In one myth, Orion was blinded by King Oenopion for kidnapping his daughter Merope, who Orion was trying to marry.

(3) Orion was the son of Poseidon, the god of the seas.

(5) Orion boasted that so great was his might and skill as a hunter that he could kill all the animals on the face of the Earth. Gaea, Goddess of Earth, was alarmed at such a boastful and inappropriate statement. Gaea decided that Orion must be killed just in case he might one day decide to carry out his boast. So Gaea sent a giant scorpion to Orion and ordered the beast to sting Orion. As mighty as Orion was, after only a brief battle, the scorpion managed to deliver the hunter a deadly sting. Scorpius stung Orion on the heel (at the star Rigel). Orion and the scorpion were given honored places in the sky, but they were placed at opposite ends of the great sky dome so that they would never engage in battle again. Although there are other storieds about how Orion met his death, this one is the most common.

(6) Zeus and the goddess Leto bore two children who would rise up to take a place in the Olympic pantheon. The twins were named Apollo and Artemis. The twin god and goddess, Apollo and Artemis, were forever connected in Greek mythology. They shared the capability of subjecting mortals to plague and pestilence. Apollo was a god of the sun and Artemis a goddess of the moon. Like many of the younger gods, Apollo never married, but seduced many girls and women. Apollo wasn’t only attracted to maidens. He was also lover of the Spartan youth, named Hyacinthus. Artemis can be a vengeful goddess. She was sometimes not satisfied unless human blood was shed to her. Looking at Artemis as a whole, we find many of her functions and roles, often conflicting and contradictory.

(7) The ancient Arabians called Orion Al Jauzah, loosely meaning “the Middle Figure of the Heavens,” and Al Babadur, “the Strong One.”