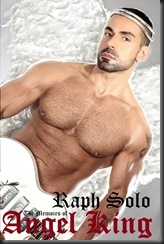 In The Memoirs of Angel King, Raph Solo weaves a tale about coming to terms with being gay and finding God in the 21st Century.  Based on the author’s real-life experiences, the novel chronicles the journey of a young male model and aspiring pop singer who yearns to find true love.  Eight years and six ex-boyfriends later, he begins to doubt he will ever find it with another man and makes the bold decision to embark on a quest to alter his sexual orientation.  He is forced to confront demons of his past, including a disconnected father and overbearing mother.  Eventually, the metaphorical Angel King conquers them in a cathartic battle, but not before a half-decade of self-imposed celibacy and a failed attempt at curing his homosexuality.  The Memoirs of Angel King is available this month on Amazon.com, iTunes, Barnes & Noble and other online retailers.

“The Memoirs of Angel King started out as a private journal I kept as part of my reparative therapy,” reveals Solo of his first book.   “I developed my entries into a novel by fictionalizing the characters and adding a supernatural sci-fi element to the setting.  However, much of the book is based on experiences in my real life. Fictionalizing the elements made it a little easier to relive.”

Angel King – the name is a derivative of the author’s full name, Raphael Solomon – is an angel from heaven masquerading as a human being on planet Earth; haunted by the ghost of his former lover, Diablo Sin. Through their relationship, Solo explores the theme of Heaven and Hell and what it means to him, personally.

According to Solo, the greatest demon known to mankind is fear: fear of loss, abandonment, rejection, and inferiority.  Fear of being used or of not living up to one’s full potential; fear of losing connection with the collective force of the universe.

Solo learned forgiveness through years of therapy, including sessions aimed at trying to cure his homosexuality.

“Reparative Therapy was positive for me in that it allowed me to identify the roots of my insecurities and it helped me to repair them by identifying their causes.  However, the process was damaging to my self esteem,” he points out. “Ultimately, I had to accept the reality of my homosexuality.”

The greatest lesson Angel King learns in the novel is that homosexuality is not a disease that can be cured.  He also learns other important lessons every well-adjusted gay man should know.

To not be beauty obsessed.  Angel King learns to place less emphasis on the body when determining a partner’s compatibility. “However, he doesn’t compromise that he has to be sexually attracted to the person,” says Solo.  “Sex is an important part of a relationship.”

To be tolerant.  Angel King encounters male prostitution more than once in the story. Solo explains he drew inspiration from the story of Jesus and Mary Magdalene. Angel King ultimately decides prostitution is not for him but he learns to not be judgmental of people in the profession.

To have gratitude.  Angel King learns to acknowledge people inflicted with HIV/AIDS.  “It would serve all gay men and women to recognize the struggles of those affected with HIV/AIDS and applaud their survival,” says Solo.