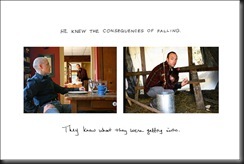 A reception and artist talk will be held WEDNESDAY, AUGUST 22nd, 2012 from 4 PM – 6 PM in the Donald G. Butcher Library on the Morrisville State College campus. This event is sponsored by the Sheila Johnson Institute.

The title of the exhibit, “Love and Human Remains” refers to Honicki’s body of work and the underlying themes of love, relationships, loss, and hope that he depicts throughout his dramatic series.  Honicki’s intent is for viewers to see his photographs as a series of dramatic vignettes unfolding before their eyes. The “actors” who portray the characters in these sometimes semi-autobiographical series are people who play (or have played) an important role in his life. Through these photographs, the viewer is able to get a glimpse into various “scenes” of his life.

The work is layered with the incorporation of a text over the photograph. The text, often not a literal interpretation of the scene, gives the image a sometimes ironic twist, allowing viewers to come to their own conclusions about the action observed.

Honicki’s first personal narrative series “Between Heaven and Hell” refers to a place referred to in doctrines of the Roman Catholic Church as Purgatory, a temporary station where departed souls strive to atone for forgiven sins – sometimes successfully, sometimes not, and prepare themselves for heaven. In these photographs, the viewer is given the opportunity to witness the various stages of the interpersonal relationships of these characters’ time in this transitory place. 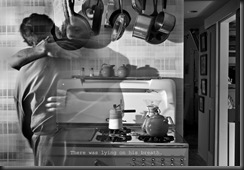 The series, “Until Soon,” tells the story of two men whose chance encounter lead them to discover they are on the same emotional and spiritual journey. A journey that is (ironically) separated by both time and distance. The title, “Until Soon” refers to a statement that is less finite (and formal) than “Goodbye” and leaves the door open for possibilities yet to come. Will this strong connection between these two men lead to something more than just a casual friendship? In these series of diptychs, the text is actually handwritten by the individual characters allowing the viewers to hear their “inner voices.”

His latest dramatic series, “Coupling” – a spin-off of the earlier series “Between Heaven and Hell,” our 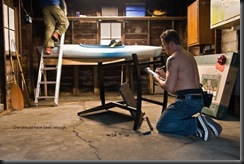 protagonist is not only dealing with the aftermath of the breakup of the relationship with the love of his life, but also the unexpected arrival of a gift – two rocking chairs. What will he do with these items that have played a role in conversations from the past as well as nightmares in the present? This series had its’ debut at the United Photo Industries’ international juried exhibition, “It a Thin Line Between Love and Hate” this past February in
Brooklyn, NY.

For more information about the exhibition and examples of the work, check out Honicki’s website at www.stevehphotography.com. The campus is located at 80 Eaton St, Morrisville, NY 13408. Directions to the Butcher Library can be found at www.morrisville.edu/maps.