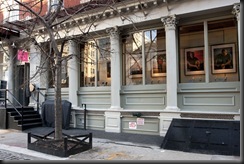 Even well after the cultural wars of the mid 1980’s, the representation of sexual difference in art has been aggressively policed. And America’s museums, with few notable exceptions, have been silent in the face of what is now the most vocal contemporary civil rights frontier. But there has never been a shortage of gay and lesbian art on display in America’s museums; what has been lacking is the courage to articulate that fact and to illustrate how the artist’s sexuality influenced his/her art.   Now, for the first time, a new museum in New York will finally show what has been hiding in plain sight.  With the recent accreditation by the State of New York as an official Museum, the Leslie-Lohman Museum of Gay and Lesbian Art has become the first and only museum of gay and lesbian art in the world.

Charles Leslie and his late partner Fritz Lohman – who organized their first small exhibition of gay art the same year as the Stonewall riots in 1969 – founded the new Museum with their multi-million dollar gift.   It is now run by a Board of Directors, helmed by Prof.  Jonathan David Katz, the co-curator of the recent Hide/Seek – the first major museum exhibit to focus on themes of gender and sexuality in modern American portraiture.  The Leslie-Lohman Museum of Gay and Lesbian Art focuses on gender and sexuality, in the still relatively unexplored historical, socio-political and cultural context in which these gay and lesbian artists lived.

“While until recently, queer art exhibitions assumed an audience of mostly queer visitors, a new generation of queer cultural institutions instead seeks to make queer art visible to a mainstream audience. If we learned anything from the record setting attendance of Hide/Seek it was that people of all stripes were hungry for precisely the information the big museums have been censoring for decades now,” said Katz. 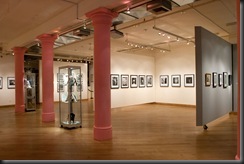 The museum has announced an aggressive programming schedule for  the Fall of 2012, featuring the first major American retrospective of transgender photographer Del LaGrace Volcano.  (http://www.dellagracevolcano.com/index.html). Widely exhibited in European museums, the American- born Volcano has been almost completely ignored in this country, and represents, according to Katz, “exactly the rationale for this new muse  um.”  This fall will also see a major exhibit of legendary American artist Paul Thek’s early work in the context of his gay social circle of the fifties and sixties, and will include many works never exhibited before. While there was an exhibit of Paul Thek’s work at the Whitney Museum in 2010-11, these early works were not shown. “This will be the first exhibition of Thek ever mounted that reveals how powerfully his gayness structured his early work,” said Katz. (There will be a separate announcement about these shows coming later).

The Leslie-Lohman Museum of Gay and Lesbian Art has a permanent collection of more than 6,000 objects spanning more than three centuries of gay and lesbian art.  The new museum will mount historical, thematic, and survey exhibitions drawn not only from its permanent collection but also from museums and private collections around the world.   Its programs include 6-8 major exhibitions a year, film screenings, plays, poetry readings, artist and curator talks, panel discussions, THE ARCHIVE (a quarterly newsletter focusing on gay and lesbian art and artists), a membership program, a research library and an archive of the permanent collection.

Though newly accredited as the first dedicated gay and lesbian art museum in the world, the Leslie/Lohman Gay Art Foundation, founded by Charles W. Leslie and Fritz Lohman, has for more than 20 years, persevered in its mission to exhibit, preserve and foster the works of gay and lesbian art and artists. The new museum will now exhibit and analyze a wider range of art and artists, national and international, while staying true to its mission.  A non-profit, membership organization, the museum is committed to offering all of its exhibitions with no admission charge.