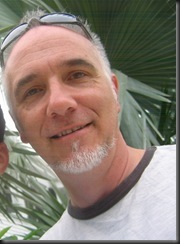 The southernmost city in the continental US has been a destination for gay travelers for decades.  But what is it that makes it a gay travel destination? Is it a “gay” place?  Is it because gays go there?  Is it because gays live there?  These answers are unsatisfyingly vague, but they contain a grain of truth.  Gays show up and fix the place up a little, and that makes gays want to go there, in a reinforcing cycle.  But I believe that it’s the party that makes the gay.  I want to tell you about a celebration that takes the gay and turns it up to eleven.  It’s Fantasy Fest. .  If you think that Key West isn’t really gay, just go down and get a load of that week long party.  They do what the gays do best – throw a fabulous party, and they do it on a city wide scale.

You may well feel that late October is hardly the time for heading south.  It’s not yet cold enough in the northeast to come down with cabin fever, which kicks in sometime in February.  But the Halloween season is not one for relaxing – it’s time for costumes and parties.

Mid- to late fall used to be the quiet time in south Florida.  It’s too early for the snow birds, and the Gulf still in the middle of hurricane season.  Around 1978, an enterprising president of the Tourist Development Association of Monroe County, Joe Liszka, saw that the Keys needed an autumn boost.  So he proposed the idea of a festival for the time around Halloween that would encourage vacationers to come down in the off season.  And so the Fantasy Fest was born.  It’s more that a week’s worth of parties, competitions, costumes, debauchery, drag, drinking, feasting and parades. 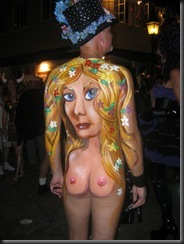 I love to participate in fun, not simply watch it, so the best activity in the Fest is the Masquerade March.  Each guest house selects a theme (one year at our guest house it was “butch leather with a hint of pink”), and all the visitors and residents pour out into the streets of old town for a parade down to Duval Street, where you can finish off the evening by joining in with the street fair and pub crawl if you’re up for it.  It’s miles beyond the basic “stand and watch” parades.  You’re a part of the action – all dressed up with some place fun to go.  You will be amazed at the creativity you’ll see on some of the marchers’ costumes, and maybe even a little jealous.

Don’t miss out on the all of the other spectacles, like the Bahama Village Goombay Festival, or the crowning of the King and Queen of Fantasy Fest, the Headdress Ball, the Pet Masquerade and Parade, The Dungeon of Dark Secrets and Fetishes at the 801 Bourbon St. Bar, or The Fantasy and Fetish at the Island House.  There are dozens of parties and competitions at the bars, straight and gay, all over the city.

Our favorite place to stay is the Island House, and all-male, clothing optional resort.  It has everything you could need – besides the comfortable rooms, there are a pool, and bar and kitchen, two hot tubs, a sauna, steam room, a gym and a video room.  You would never have to leave, but they participate in Fantasy Fest, and it’s difficult not to join in.

I enjoy a vacation that I need a vacation from.  The more activities, the better I like it.  Fortunately, when I’ve exhausted myself, the Island House has all the relaxing amenities for recharging.